…to bring you the most epic ending to a football game ever! The Seahawks just came from behind and won the NFC championship game in overtime. We are going to the Superbowl for the second time in a row!! Hats off to the 12’s, Pete Carroll, Russell Wilson and the whole team. 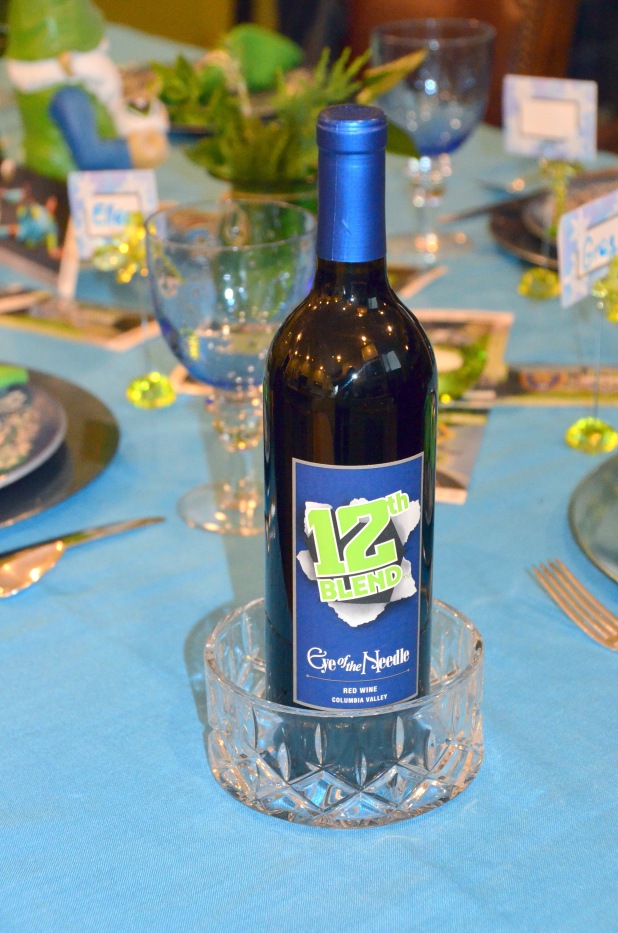 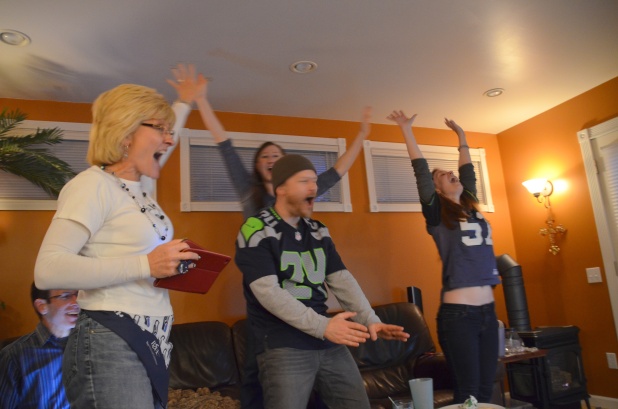 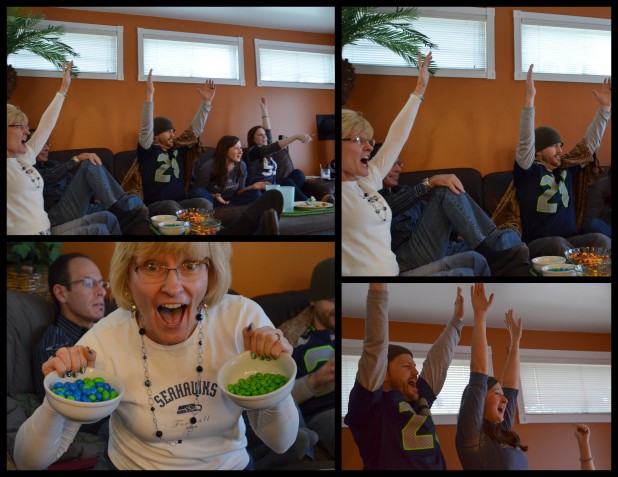 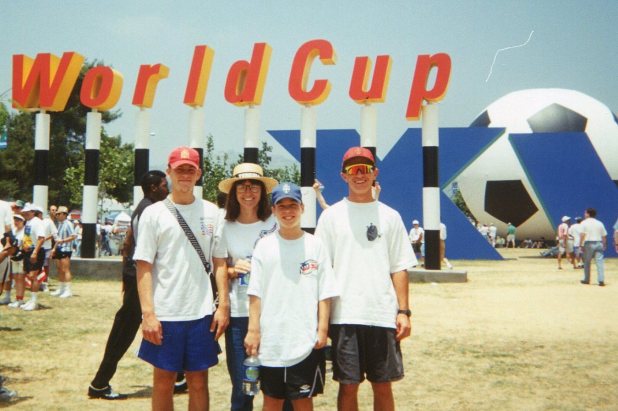 With World Cup 2014 in progress right now in Brazil I decided to re-post our photos from the 1994 World Cup in the U.S.A. I published this post on June 17, 2010. The kids and I flew down to Southern California and stayed with my parents for the duration of World Cup. Josh was able to get a ticket package for the Rose Bowl venue and Dan was able to get 2 tickets for the Brazil vs. Cameroon game in San Jose at Stanford. Dan and I traveled to Stanford to see that very colorful game. 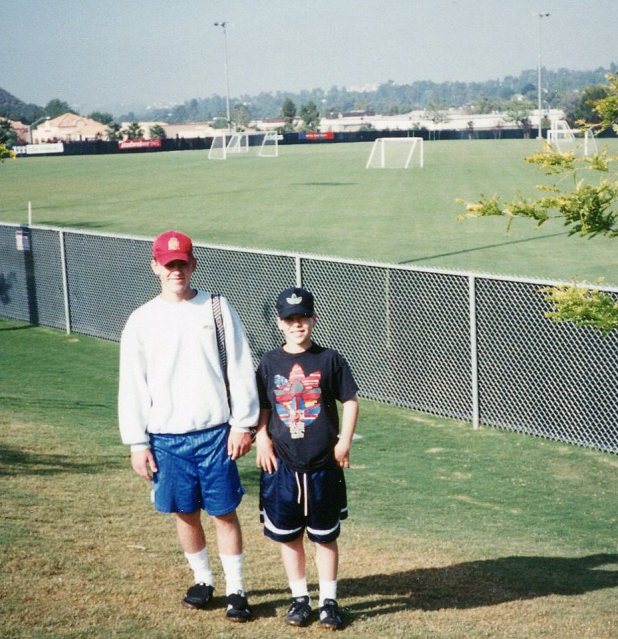 In 1994 our boys were 15 and 13. We found the U.S.A. training facility in Southern California and were able to see some of the team and practice and get an autograph. 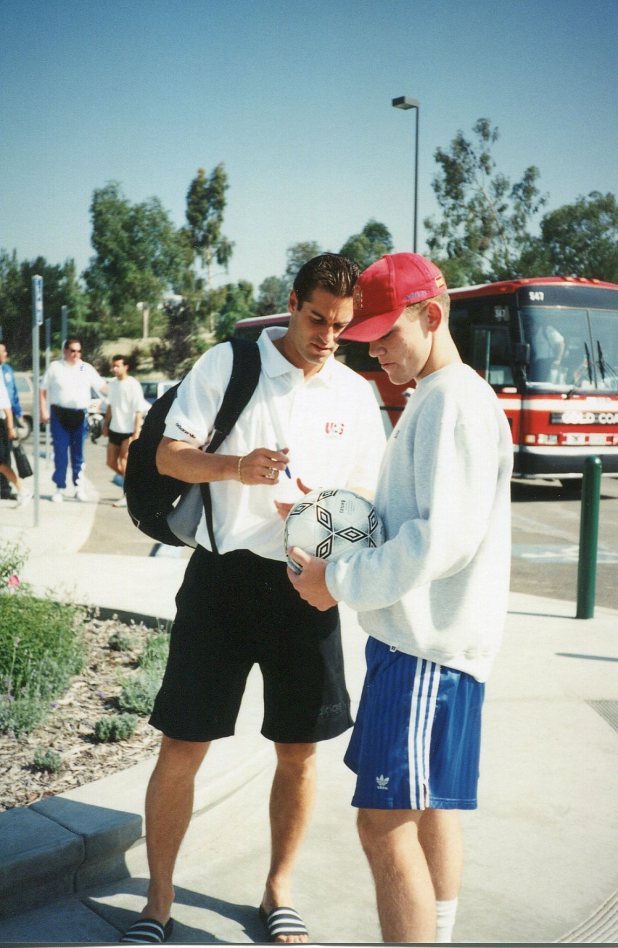 Later during our time in Southern California we found out the hotel the team was staying at and we traveled there and hung out watching for players so Josh could get his Team poster autographed. 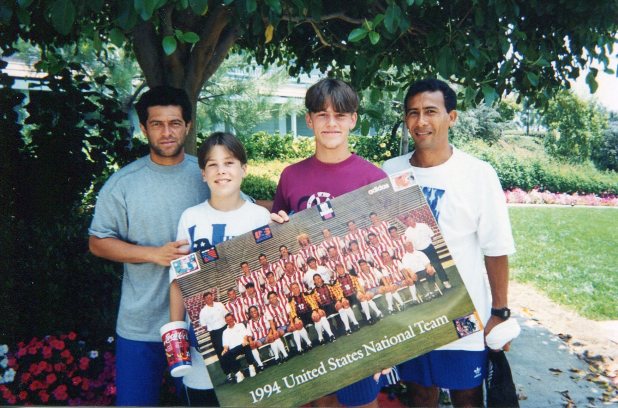 Our patience won out and we had a great time. 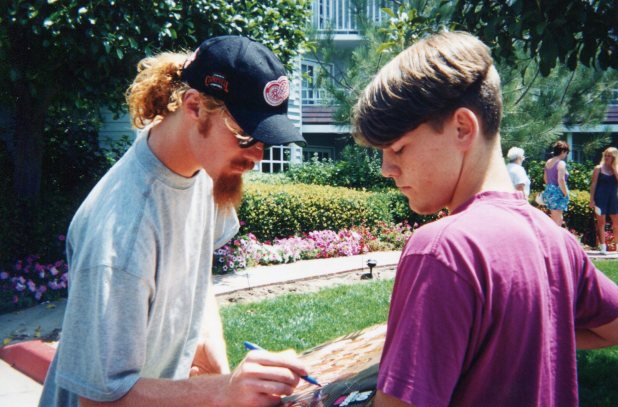 This is Alexi Lalas with Josh and Dan. 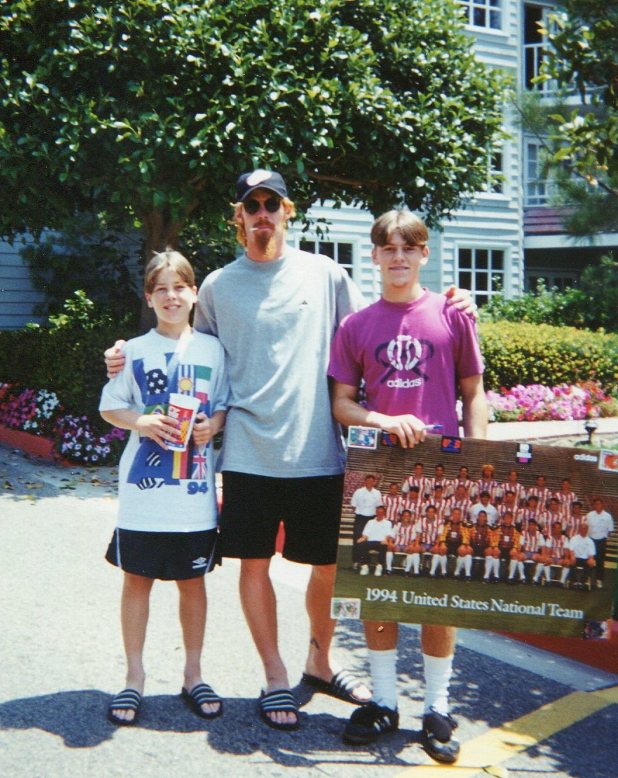 Josh and Dan got every players signature on the team poster.  Lalas, Meola, Harkes, Dooley, Wagerle, Balboa, Ramos, Reyna, just to name a few. They also managed to get all the coaches signatures but one. The players were all friendly and willing to talk to the boys and sign autographs. What an exciting and fun experience for Josh and Dan and me! 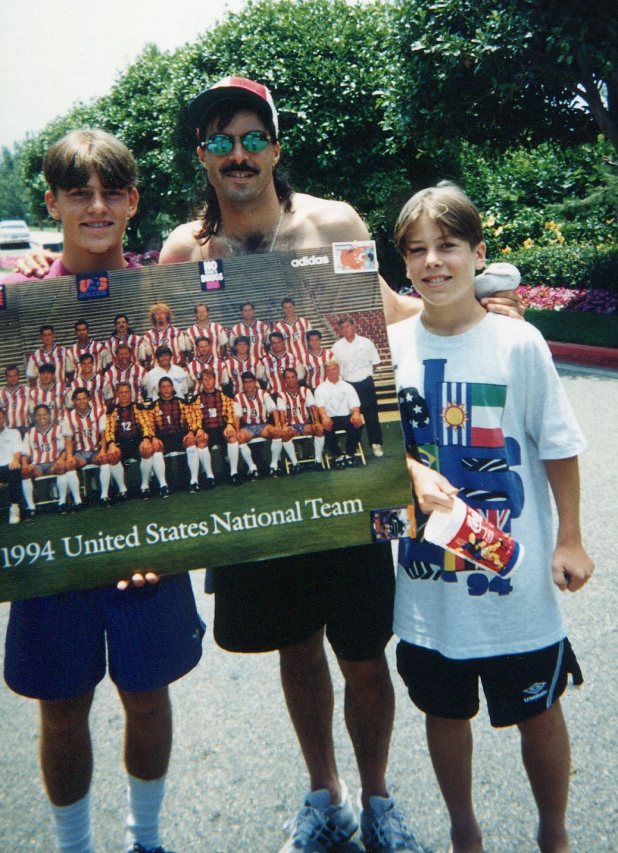 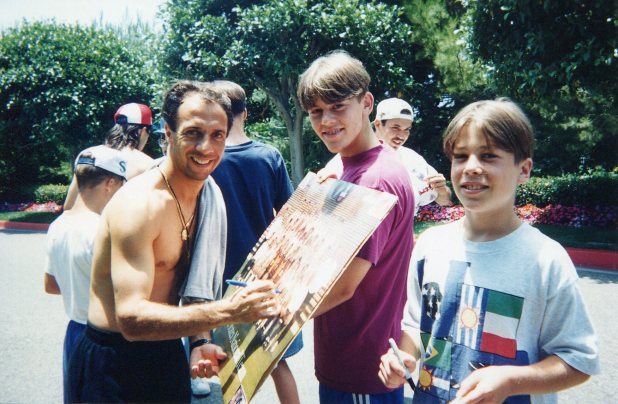 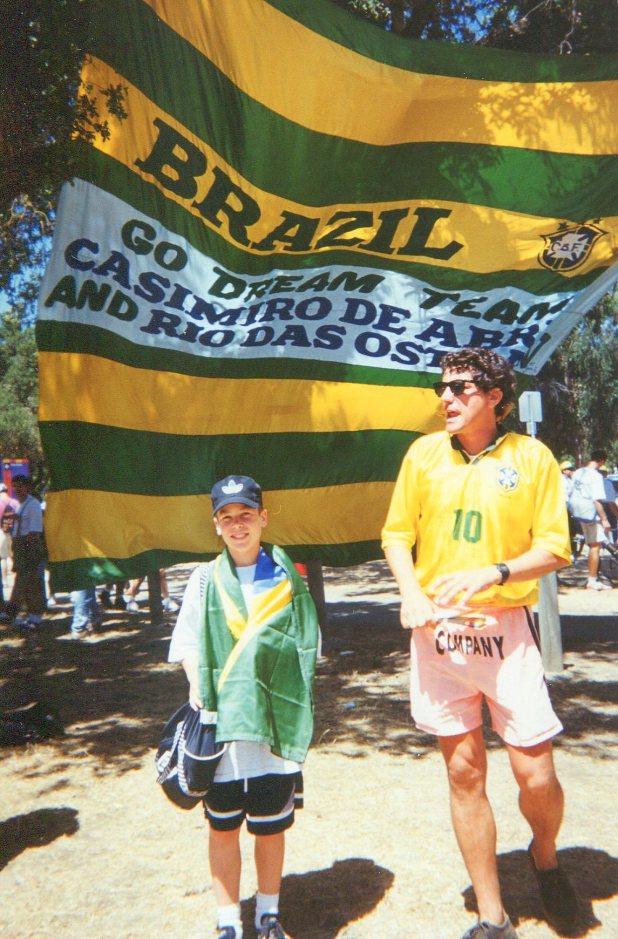 Dan and I drove to Clovis and spent the night with my cousin and then we drove to a train station to take a commuter train to Stanford for the Brazil vs. Cameroon game. We found a shop that had a Brazilian flag and bought it for the game. Brazil brings a  party atmosphere to soccer games that’s hard to beat and we had fun experiencing it. 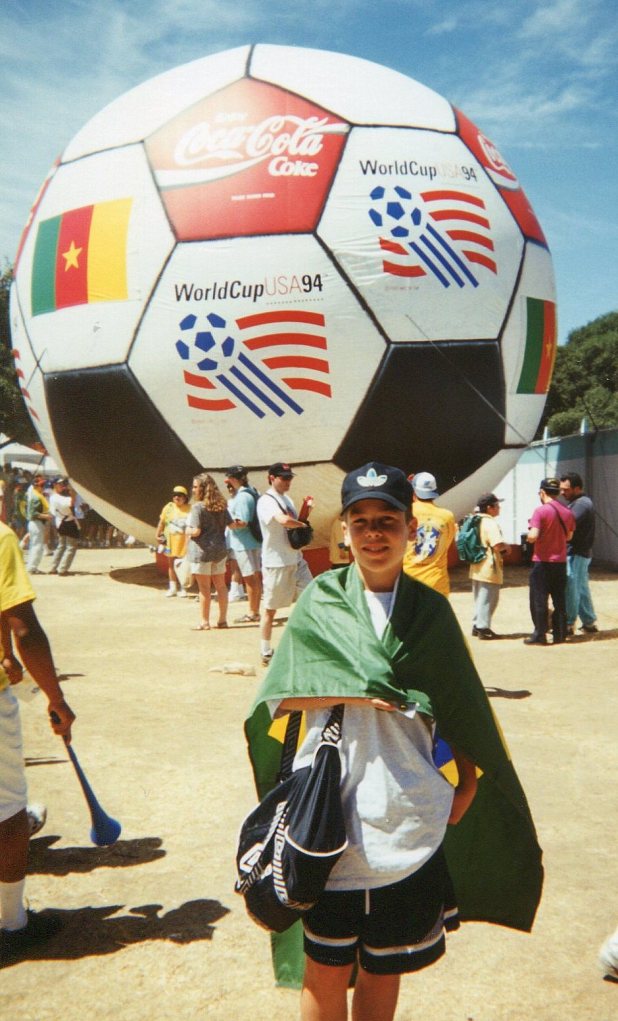 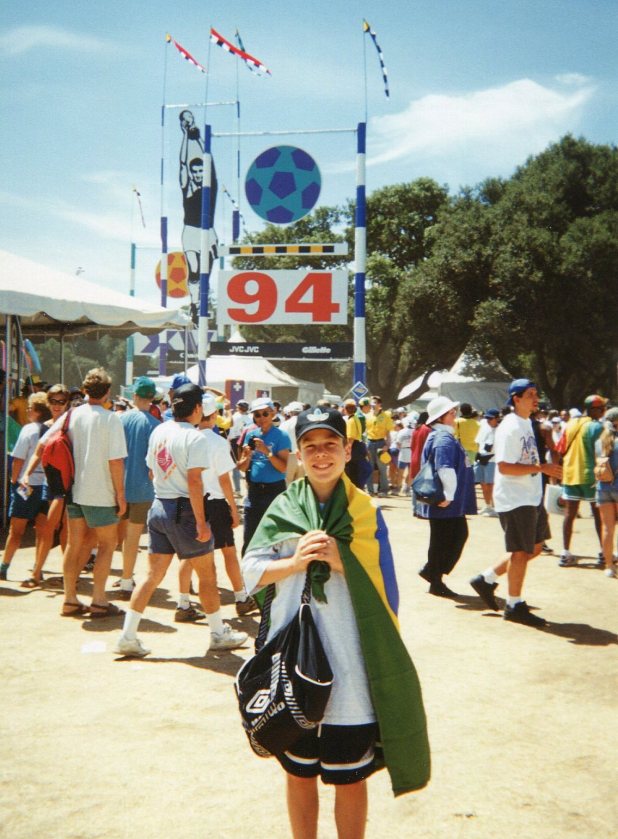 We finished off our time at 1994 World Cup with a game at the Rose Bowl where the final game would be played. 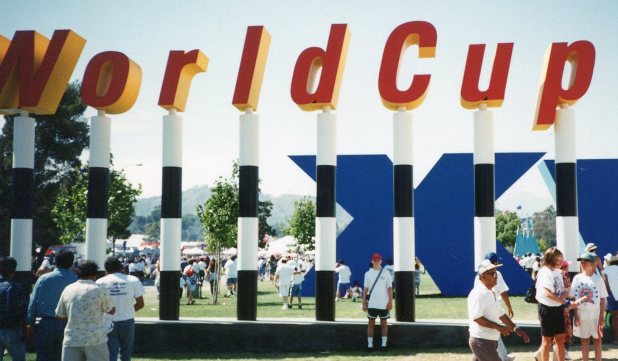 Participating in this historical event was thrilling for our family. 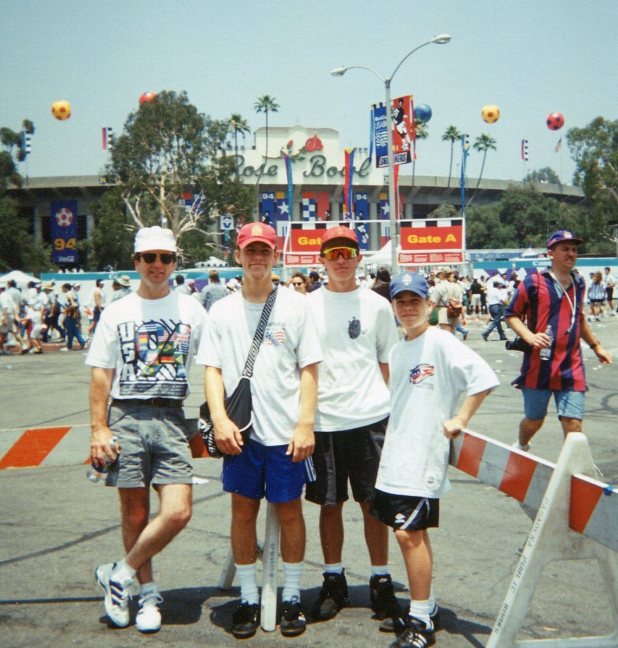 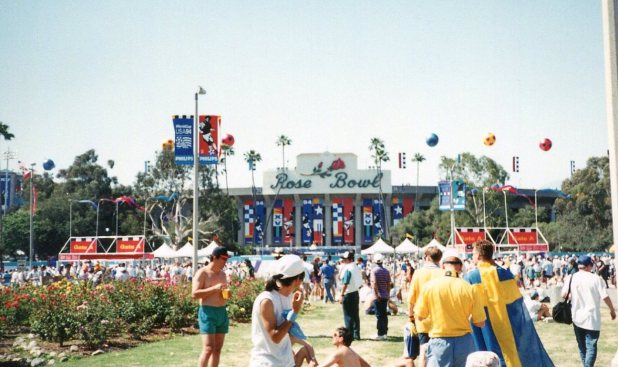 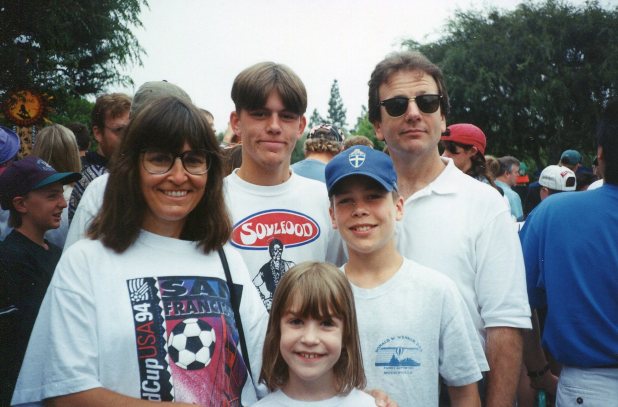 1994 was the first time the U.S.A. hosted World Cup. We were hoping the U.S.A. would be chosen for the 2018 World Cup or the 2022 but alas Russia and Qatar got the nod for those cups. Now we hear that there were some shady dealings in Qatar decision. The U.S.A. plays their first game on Monday against Ghana at 3 pm Pacific time. Our family room will be full of U.S.A. soccer fans! 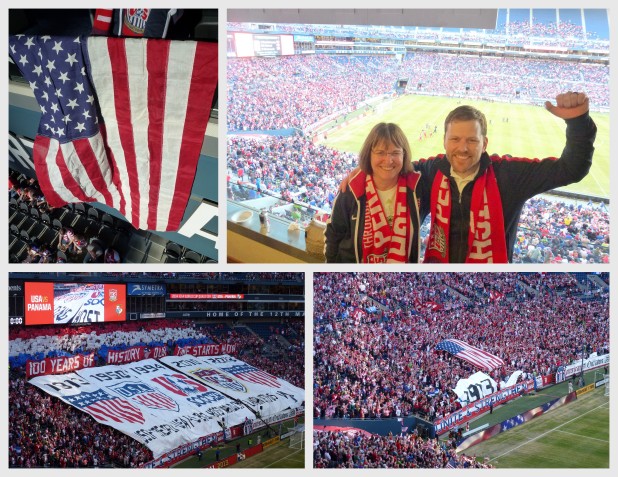 I’ll be adding my World Cup link to ABC Wednesday this week since we are at the letter W.

City of Seattle * Office of the Mayor

WHEREAS, the City of Seattle appreciates its professional sports teams, recognizing that they add to the city’s prestige, elicit home-town pride and offer a sense of collective camaraderie and solidarity within our communities; and

WHEREAS, the Seattle Sounders FC – which has completed a dream season – embarks on its playoff run, becoming just the second team in MLS history to do so in its inaugural season; and

WHEREAS, the Sounders FC is the most successful espansion franchise in the history of US soccer, boasting the best per game attendance average – 30,943 – in MLS history; and

WHEREAS, the Sounders FC has become the first US soccer team to break the top 50 in average attendance of all the Fu’tbol clubs throughout the world; and

WHEREAS, the Sounders FC – winner of the US Open Cup – qualifies for CONCACAF Champions League next year; and

WHEREAS, the Sounders FC is now the franchise by which all others will be judged, and whose supporters are the envy of clubs everywhere;

NOW, THEREFORE, I, GREGORY J. NICKELS, Mayor of the City of Seattle, proclaim October 29, 2009 to be

in Seattle, and I hereby urge citizens to join me in raising our “scarves up,” and wishing the Rave Green all the best as they compete for the 2009 MLS Cup.

The old gray mare, she ain’t what she used to be,
Many long years ago.

So ellen b. is tard today, really tard. (tard is tired with one syllable). I just had way too much fun yesterday and it wiped me out. I had my Bible Study Table over for an English Tea at 11:00. Walked with Willow at 2:30. Went to Ventura with Dear at 4:30 for dinner and a soccer game at 7:00. Got home with the light of the moon. So much fun takes it’s toll these days.

I’ll post more about the tea another day with recipes for the things that worked well. But let’s get to my other passion…SOCCER! I learned to love soccer when my boys played. Some people find soccer/futbol boring but not me. I love to see the plays progress and that golden moment when everything connects just right and the ball goes into the net!

Seattle got it’s very own MLS team this year and the Seattle Sounders F.C. are training in Ventura right now and playing some pre-season games. My son Josh called to let me know that they would be playing in Ventura last night just 20 minutes away from us. We bought tickets on line and headed out to Ventura last night to see them play. Dear and I decided to have dinner at Ferraro’s, an Italian Restaurant that has been in Ventura a long time and one we used to go to in the mid 80’s when we lived in Ventura. We are trying to figure out how they make their meatballs so soft, they melt in your mouth. We decided to have Chianti instead of Burgundy because we’d probably cheer for an Italian soccer team before the French team. :0) Just checking to see if you’re still reading this. It was fun to see a game in person again. It’s been a long time. We spotted one other Seattle fan with a jersey on and did our high fives and cheered together. Seattle won 6-1, so we got to see a lot of great goals scored and I’ve picked out two favorite players so far…#17 and #19.

But here I am today, tard, just plain old tard, but happy!

Photobucket is holding all my photos I stored with them from 2007-2015 hostage unless I pay them a lot of money. I’m slowly cleaning up many posts from this time period and deleting their ugly grey and black boxes with a ransom request. Such a time consuming bother.

I have been to two Rose Bowl games in my life. The first one was in 1967. A boyfriend I had broken up with invited me to go to the USC vs. Purdue game and I said yes. I was and am a big sports fan. Sad for the young man, it was the game I was interested in and not him. Some of us in Southern California are not huge USC fans in fact we always cheer on whoever is playing them. I was pleased as punch at the exciting close game and that Purdue won! These days I’m a huge soccer fan!

Purdue capped its first nine-win season with a hard-fought 14-13 victory over USC. A pair of touchdowns by fullback Perry Williams and a last-second interception of an attempted two-point conversion by defensive back George Catavolos secured the victory for the Boilermakers. Purdue finished the season 9-2 and tied for 1st place in the Big Ten.

The last Rose Bowl game I attended was in 1992. Dear was finishing up his mid-life career change in Pharmacy School at the University of Washington so we scored some student tickets to the Washington ~ Michigan game. Those were wonderful football years for the Huskies and it was fun to be able to attend several of the games. It was a little odd for us older folks to be sitting in the middle of the student section, though. We’d always ask the kids behind us if they could hold their liquor. We didn’t want them losing their alcohol on our heads :0)! They would always look at us and with slurred speech say “Oh don’t worry ma’am, we can hold our liquor”

What a dismal year in sports good ole Washington has endured this year. We are looking ahead to better years. I’m so excited that Seattle now has their very own MLS team, The Seattle Sounders. Here’s hoping they’ll pull us out of the humdrums…

Photobucket is holding all my photos from 2007 to 2015 hostage and has replaced them all with ugly black and grey boxes asking for a ransom to have them re-published. Such a frustrating bother as I go through each post to delete the ugly boxes.

Over 14,500 fans registered their vote for the new
MLS in Seattle team name.  Thank you for your participation. The fans have spoken…

The name of Seattle’s new
MLS franchise is:

We finally get a MLS team in Seattle. If I was still living there full-time I’d buy myself season tickets for sure. Did I ever tell y’all that I’m a huge soccer fan. In fact while I’m lounging about today with horrible muscle spasms in my lower back I’m watching the soccer channel to wile away the hours of pain, watching Aston Villa walk all over Bolton.

Here’s what our weather was like yesterday and what it’s suppose to look like today. Our muddy walk was on Saturday when we had weather very similar to Sunday.

this in a little less than a year!

I’m hoping to get to see some fun soccer just steps away from my back door. Besides all these soccer pitches they are also putting in 3 baseball diamonds on the far end.

Here are more photos from our muddy Saturday walk.

I’m hoping they find a way to save this tree.

So is this what your dog’s paws looked like yesterday Kim?