Way back in November of 2019 the girls and Jaymison had a little trip to Whidbey Island on the Mukilteo Ferry. This was Jaymison’s first ride on a ferry but I think it might have been Addy’s 2nd ride.

Front row seats for the ride back to the mainland.

This is a catch-up post for future reference. Our blogs really are a great source of family history!

This letter wasn’t an easy one for me but I know as soon as I visit other entries I’ll think, “why didn’t I think of that?”

Starts with I: Island

This was taken on Whidbey Island in Washington State looking towards Camano Island. Washington State has several lovely islands to visit. Some you can drive to using bridges and others you can enjoy with a ride on a ferry.

Interesting scenes in Indiana that we don’t see here in Washington State. 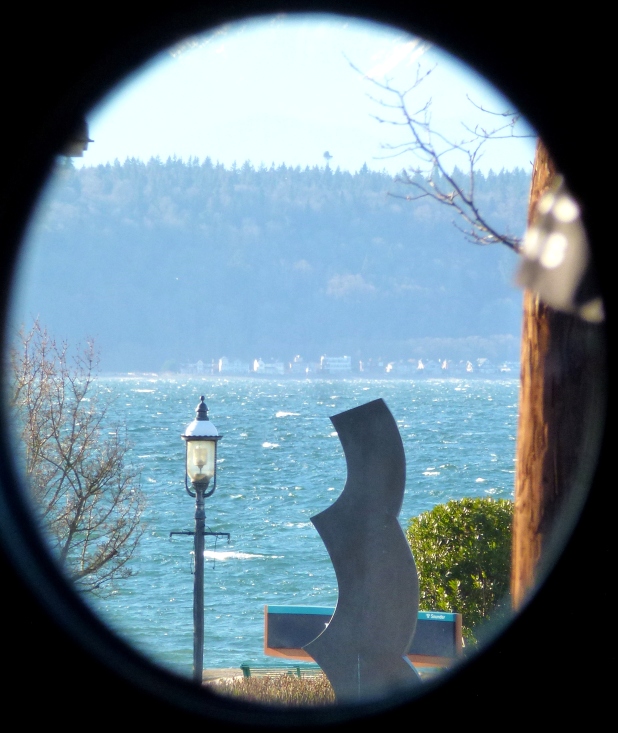 Inside Rory’s looking out to the Puget Sound in Edmonds, Washington. 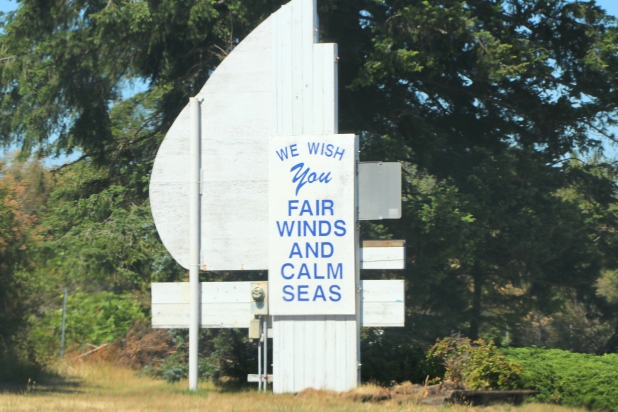 Linking up with Tom for The Weekend Roundup “I”.

I’ll try and visit as many as I can this evening as Dear and I head out early again tomorrow morning for our 6 hour trek to Northeastern Washington with another truck and trailer load. This trip I’m following behind in one of our cars and we’re leaving it in Colville just bringing home the truck and trailer to pack up the very last load!

On Saturday we drove to the north end of Whidbey Island to visit Ebey State Park and to enjoy a meal in Coupeville, Washington.

The weather was beautiful which brought out the crowds. Our realtor was having an open house at our home so we had to be away from our home for several hours and we took advantage of the weather to enjoy a short hike at Ebey and have some Penn Cove Mussels in Coupeville. I’ll post our photos from our walk/hike at Ebey and some photos from Coupeville tomorrow or later.

Linking up with Tom for The Barn Collective. 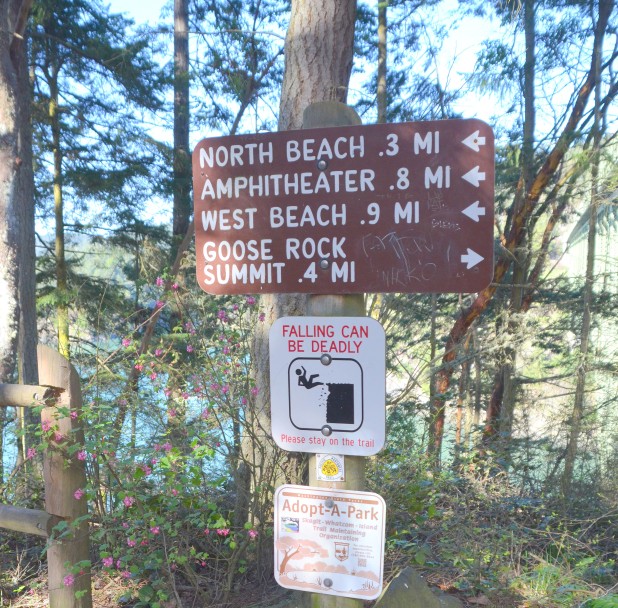 My favorite on this group of signs, “Falling Can Be Deadly”, so don’t fall people! This series of signs were taken at the Deception Pass State Park on Whidbey Island in Washington State. 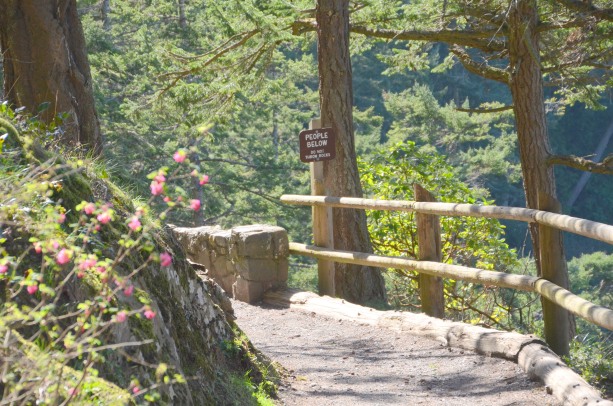 This next sign is on a building on Front Street in Coupeville on Whidbey Island.

I’ll be linking up to signs, signs with Lesley and Good Fences #104 with TexWisGirl.

Dear and I are considering a little getaway to Vancouver B.C. since the U.S. dollar is strong for a change. I hope to take lots of photos of what we see and experience. So excited that Spring is coming! How about you?

…a short excursion or journey for pleasure.

Last Saturday the Bagdanov sisters had a jaunt in Washington state that took in Mt. Vernon, La Conner, Deception Pass, Coupeville, and Langley leaving the island by ferry back to the mainland in Mukilteo. Here are some photos of what we saw.

Daffodil Fields in Mount Vernon, Washington. Soon these fields will be full of tulips!

The Swinomish channel in La Conner. 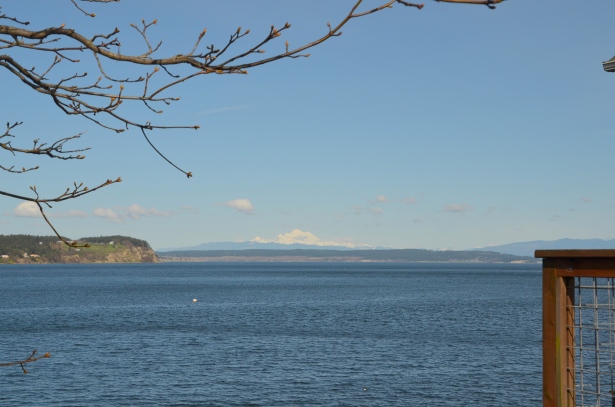 Saratoga Passage and Penn Cove in Coupeville on Whidbey Island where Penn Cove Mussels are famous. 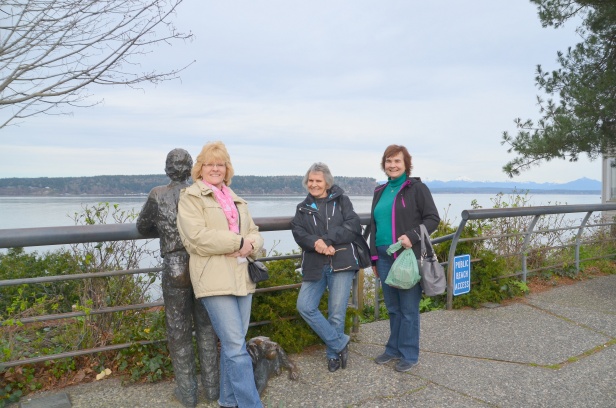 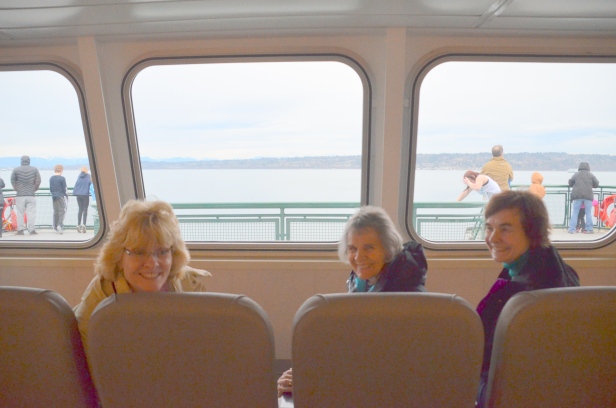 Ready for our trip from Clinton on Whidbey Island to Mukilteo on the mainland.

On the mainland we stopped for dinner in Millcreek before we headed home to put our feet up!

Lots of posts about our sister weekend but they don’t happen very often and I have the need to document our time together. Treasured times at treasured locations in the state of Washington.

Linking up to Tuesday’s Treasures with Tom at The Backroads Traveler and J is for Jaunt with ABC Wednesday with Mrs. Nesbitt and Roger with the ABC Team.

…into part of our sisters weekend. I’ll share more later because we’re still cracking each other up…

My prayers were answered for a nice day on Saturday for our major tour day! Thank you Lord!

I’ll be back in my blogging saddle on Wednesday!

This fence is in the town of Coupeville on Whidbey Island. Coupeville is on the shores of Penn Cove. We enjoy the Penn Cove Mussels in this little island town in Washington State. Truth be told it’s the sauce that makes a mussel dish good in my opinion. We’ve enjoyed eating at Front Street Grill in this little town and they serve mussels in a variety of very tasty sauces. One of my favorites is Coconut Green Curry Mussels!

Linking up with TexWisGirl for Good Fences #99!

Soon I hope to take a drive on this island again. We’re having a “sisters” weekend early March and my head is spinning with fun things we can do together. Two sisters in Washington state and the other two sisters in Southern California. We are meeting up in the northwest.  I never tried mussels or oysters or much fish to speak of until we moved to the Seattle area. Fish was not something my mother was too familiar with in the kitchen. We also ate kosher growing up so shell fish was taboo.

Hope you have a good Thursday!

Langley United Methodist Church on Whidbey Island. We were in Langley on Thanksgiving weekend and I took this shot.

Linking up with Beth and Sally at InSPIREd Sunday.

Photobucket is holding all my photos from 2007-2015 hostage on their site. All my photos that I stored and uploaded from that site are now big ugly black and grey boxes with a message to pay big bucks to get them restored to my blog. It will take me a long time to restore thousands of posts.

On Black Friday we hopped on a ferry from Mukilteo to Clinton on Whidbey Island for a visit to the quaint and picturesque town of Langley on Saratoga Pass.

While waiting in the ferry line I took a photo of this sign. I guess the people in ferry line-ups can get a little feisty.

Once off the ferry we found a parking spot in Langley and headed to Prima Bistro for lunch.

My brother Tim with his wife Letty.

Overlooking the passage from First Street in Langley.

Dear and me. Dear’s facial hair is gone as of today.

Some quirky things that we saw along 1st Street.

I’ll also be linking up to Signs, signs by Lesley later on Wednesday of this week.

Our long Thanksgiving weekend was filled with lots of great fellowship and great food. We are so thankful for all the gatherings and fun times we had and are having. Our Thanksgiving company leave on Tuesday. Today we enjoyed a small Thanksgiving feast at our house and now the table games are happening while I watch Soccer with some Jalapeno chips. I’ll share more from our Saturday and Sunday Thanksgiving happenings later in the week.

Both of these buildings are on the same property on Whidbey Island in Washington State. The Large barn is now an antique store.

I’m linking up with Rose Street Reflections and Barn Collective #18. Thank you Amy!

We had a drippy but productive weekend at this old house. I’ll post some photos from the weekend tomorrow.

The Happy Wonderer ~ ellen b.
Blog at WordPress.com.
Loading Comments...