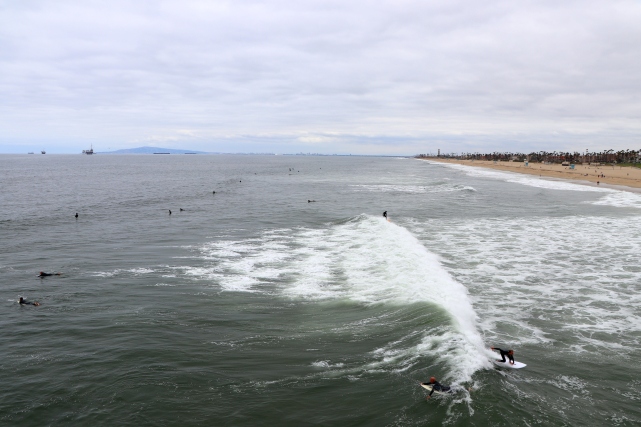 On Thursday the 25th of May my sister Vera and I had a walk in Huntington Beach and on the pier.

It was fun to see the pelicans. They look so prehistoric, don’t they? 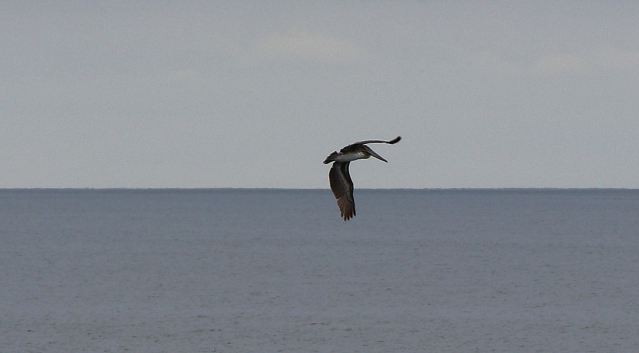 We took the obligatory selfie.

On Friday Kathy joined Vera and me in Huntington Beach for a sister morning. We had breakfast and did some shopping together.Our youngest sister, Lana, is traveling in Scotland right now.

Before Kathy left we took another sister selfie.

On Saturday we are going to have another family gathering with more of our family at my sister Vera’s. It will be nice to see two of my brothers and my sister-in-laws. Vera and I will be baking again on Saturday morning because our dear old pop told us it would be good if we baked another roolyet (nut roll) for our family gathering.

I’ll be posting the recipe of this family favorite on the Mennonite Girls Can Cook on the 31st of May.

Hope you are having a good long weekend and can pause to remember those who have fallen in service to our country.

It’s been a while since I’ve been able to photograph sea birds.

I was so happy to see this Pelican.

This Heron was fun to see, too. A Blue Heron in a spot I don’t usually see them.

These were not the birds I was excited to see. But there they were all in a line begging to be photographed. They were some of the fattest pigeons I’ve seen in a while.

We are home safe and sound. It’s always good to come home. We enjoyed being in the bright sunshine for a few days but “there’s no place like home”.

Did you put all your white shoes away? It seems the rules have changed over time and white shoes are now acceptable after Labor Day.

Cannon Beach was a stop along our way down the coast of Oregon but just to take some photos. In the future after seeing all the beaches from Astoria to Lincoln City we would choose Cannon Beach to return to.

“The City of Cannon Beach is located on the Pacific Northwest Coast of Oregon, 80 miles west of Portland and 25 miles south of Astoria, Cannon Beach is surrounded by the rugged natural beauty of forests, ocean beaches, and rivers. Only four miles in length, and with a population of 1,695, Cannon Beach is a popular and picturesque resort area, playing host to an estimated over 750,000 visitors annually. Although Cannon Beach was incorporated as a city in 1957, it has been occupied much longer: first by native cultures, and then, since the late 1800s, by American settlers. In 1806, Captain William Clark, of the Lewis & Clark Expedition, traveled south to our area in order to secure needed blubber from a whale beached near the mouth of Ecola Creek.”

This is the Tillamook Rock Lighthouse. It has some interesting history behind it and you can read about it here.

“Located near Cannon Beach on the North coast of Oregon, Haystack Rock is a unique monolith that attracts wildlife and tourists alike. Towering 235 feet  over the beach, the Rock is home to nesting seabirds in the summer and marine  invertebrates all year long. It is one of the largest “sea stacks” on  America’s Pacific coast.”

I was excited to see these pelicans. It has been a long time since our weekly walks on the beach in California where we’d see pelicans all the time.

I’m looking forward to returning to Cannon Beach in the future for a whole weekend.

It’s time to head over to Susan’s at A Southern DayDreamer for Outdoor Wednesday. All my photos were taken at Emma Wood State Beach in the wee morning hours this past Saturday.

Aren’t digital cameras great! I was just thinking about how we used to have to load a roll of film after every 24/36 photos and we never knew if the photos were good till after we had the film processed! I am so thankful for digital photography!!

On Saturday Dear and I went down the coast to Malibu to check out the Malibu Lagoon. It was a drizzly gray day in Southern California but that’s good weather for Dear and I.

This beautiful white Heron came gliding in. They are always so much fun to watch in flight.

Look at that duck surfing on that board! It was fun to see other critters besides birds, too.

While we were here we also explored the grounds of the Adamson House which is part of the Malibu Lagoon State Park and owned by the state of California. If you ever visit the lagoon make sure you cross the bridge over the lagoon on PCH and visit the house.

Have a great Wednesday everyone and make sure you click over to Susan’s at A Southern DayDreamer to see more of the Oudoor World.

It’s Friday and time to recall our favorites from this past week. Head over to Susanne’s at Living to Tell the Story to participate or see some favorites.

It was wonderful to have morning walks this week with Willow without our typical June Gloom. The skies were bright and we even had a few clouds mixed in with the blue!

The hydrangeas are blooming full right now and they always make me smile.

The birds are so much more active and visible when we walk in the morning. I’m happy when they sit still long enough for me to snap a photo.

I really have become a person who loves photography. If I can be out with my camera I’m a happy camper. I kept getting closer and closer to this critter trying not to scare it off it’s perch.

I’m not a sit on the beach all day kind of person but I do love early morning walks on the beach. Seeing any beach wildlife is such a bonus.

Looking forward to seeing your favorites from the last week later in the day. I’m driving across town this morning to take my Pop and Mom out for a Father’s Day breakfast with my sister Kathy. Have a wonderful Father’s Day and beginning of Summer weekend everyone!

It’s almost Wednesday and time for Outdoor Wednesday hosted by Susan at A Southern DayDreamer. I went to explore a beach I’ve never been to before last week. It’s one I’d love to go to again…

You access this beach from a steep dirt path and then some steep stairways.

The rocks were a great visual treat!

It was fun to watch the pelicans fly and land. The cormorants just sat still the whole time I was there. I took lots of photos of the pelicans and I’ve already posted some.

Happy Outdoors to you! Looking forward to seeing your outdoor shots. Here’s hoping Mr. Linky will behave and give Susan a break this week!

My Three or more photos are all taken at El Matador Beach North of Malibu. The pelicans were out in numbers and it was fun to try to capture them in flight.

Tam at A Gypsy’s Corner is the hostess for Three or More each week. Click on over to see more or to join in.

Even though our 6:00 AM beach walk was socked in with a marine layer we were very happy because this change in our weather is helping out the fire fighters who are battling the Jesusita Fire in Santa Barbara. The fire was 30% contained the last we heard and 38,000 people have been evacuated so far. Our nephews college, Westmont, has been evacuated for the second time this school year. There is some optimism today that things are getting better. They estimate containment on May 13th. Our nephew won’t be able to move his personal belongings out of his college dorm room until the evacuation orders are lifted. The last day of school was Friday.

Our walk today was all about the birds!

Can you see all the holes in the sand that these little birds have made looking for breakfast?

It is so much fun to see these birds move up and down the sand as a group.

I was practicing catching birds in flight today.

Enjoy your weekend everyone. For all the mothers out there, a very Happy Mother’s Day to you with all God’s blessings!

My three or more this week are photos I took of Pelicans we saw this last Saturday at Emma Wood State Beach in Ventura.

For more Three or More visit Tam at The Gypsy’s Corner.

The Happy Wonderer ~ ellen b.
Blog at WordPress.com.
Loading Comments...