…we are still celebrating.

This time it was just Dear and I who went out to dinner to celebrate my birthday which was a week ago. Greg searched on line to find a restaurant that served some good sounding lamb dishes.

We ended up at Pogacha Restaurant in Bellevue. Dear had the Lamb T-Bone Chop and I had the Lamb Shank. The meat was falling off  the bone on my Lamb Shank and that’s the way I like it. Dear enjoyed his chops…a lot. We had a pear cobbler like dish for dessert. We shared. It was nice to share a meal together at the end of a week filled with ups and downs. 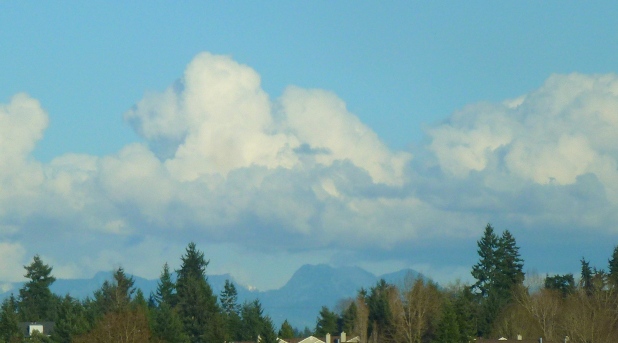 What a beautiful day we had on Friday. This was one of our views driving home from the restaurant. The mountains you see are in the Cascade Mountain Range. We are hoping for a few more dry sunny days so we can do a major clean up of our yard.

What are your plans for the weekend?

Since my parents lived in Persia (Iran) from the early 1930’s till 1947 they learned to enjoy Persian cuisine and to cook many dishes. We finally found a Persian restaurant we enjoyed in Bellevue, Washington.

Dear had the lamb kabobs.

I had the Ghormeh Sabzi. Chopped and sauteed parsley, spinach and leeks, simmered with stew beef, herbs and red beans.

Katie had Chicken Vegetable Curry. All entrees were served with basmati rice with saffron.

This is my all time favorite salad. So simple and fresh and delicious. It was called Shirazi at this restaurant.

We would recommend Caspian.

Do you have an international food favorite?

The Love of God

The love of God is greater far
Than tongue or pen can ever tell;
It goes beyond the highest star,
And reaches to the lowest hell;
The guilty pair, bowed down with care,
God gave His Son to win;
His erring child He reconciled,
And pardoned from his sin.

O love of God, how rich and pure!
How measureless and strong!
It shall forevermore endure
The saints’ and angels’ song.

When years of time shall pass away,
And earthly thrones and kingdoms fall,
When men, who here refuse to pray,
On rocks and hills and mountains call,
God’s love so sure, shall still endure,
All measureless and strong;
Redeeming grace to Adam’s race—
The saints’ and angels’ song.

Could we with ink the ocean fill,
And were the skies of parchment made,
Were every stalk on earth a quill,
And every man a scribe by trade,
To write the love of God above,
Would drain the ocean dry.
Nor could the scroll contain the whole,
Though stretched from sky to sky.

There were lots of interesting handcrafted, painted, sculpted, wrought, things to see. I had to take a picture of a quilt for Ivory Spring and a picture of a Knitting booth for Willow. Aren’t those masks made out of feathers interesting? I clocked 7000 steps and decided to go to where I’m willing to spend a lot less on treasures…The Bellevue Goodwill. On my way back to the car I had to take a photo of the reflections in the high rise buildings in downtown Bellevue.

Now off to Goodwill and here’s what I found this trip.

I nabbed a large what looks to be Russian Teapot for $5.99. The Cake plate and cover were $9.00. The sweet plates (6 of them) were $.99 each. The Pink glass tea cups and saucers were $2.99 each (a little pricey) but I think they look great on the mint and pink rose trimmed plates. My favorite purchase today is the “Russian teapot”

I found a couple of Goodwill items for my bloggy friends in Southern California that I’ve gotten together with face to face, Willow and Sara. I met Sara in person at the Getty Villa. I met Willow in my hometown in California. When we are both in town Willow and I try to walk Monday thru Friday.

For Willow from Willow’s Cottage who likes blue, I found this pretty blue decantor/vase (made in Italy)

I got real nervous when I saw the Edith Holdren book you found at the book store and was happy it wasn’t this one. So you can stop looking, Sara.

Have a wonderful weekend everyone…

I’m joining in with How Sweet the Sound and her Pink Saturday. So much pink so few Saturdays! Here are my choices for today. I’m looking forward to pulling out my pink over the next few weeks. 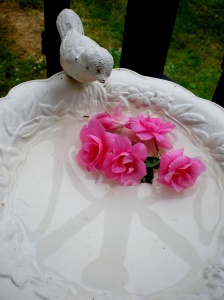 To see more Pink Saturday Posts click “How Sweet the Sound” above. Have a wonderful Saturday everyone…

I decided to add this to my Pink Saturday after visiting a few sites. This was taken at the Bellevue Botanical Gardens this past week in the State of Washington. Have fun with all the pink today!

While I’m in the Seattle area for a spell, Katie and I are doing some tourist projects on her days off. We’re going out to enjoy God’s creation around us here in the Puget Sound Area. On Tuesday we took a trip to Bellevue to stroll through the Botanical Gardens. There were so many beautiful things to see. The garden is free with free parking, too. It’s located on Main Street between 120th Ave. NE and 124th Ave. NE.

So lush, so green, this is one of the benefits of our climate in the Northwest.

Makes you think that Faeries might be living here.

The different shades of green were wonderful. The sun was shining without a cloud in the sky so the light made for some great contrast with shadow.

Many of the Spring blooms have faded but there were plenty of summer blooms for us to enjoy. I’d love to come back here in the Spring.

The Fuchsias were blooming.

Don’t you just love all the pink flowers God created for us to enjoy. Hydrangeas are just coming out in their glory. And now for the prettiest blossom in the garden…

Our sweet daughter Katie. Today she had a crooked smile because she had just had some dental work done and half her mouth was numb. Beautiful never-the-less.

This first shot was taken from Yarrow Bay in Kirkland looking out over Lake Washington to the West on July 6th.

This was taken from my bedroom window looking Northwest.

This last photo was taken at the Botanical Gardens in Bellevue, Washington on July 8th.

We are having a few days of clear sunny weather in the greater Seattle Area.

For more Sky Watch photos head over to Tom’s at Wiggers World.

Our hostess Anna Carson has challenged us with a Black Project this round. Here is my daughter Katie this last Tuesday at Uwajimaya – a wonderful Asian Market we have in the Puget Sound Area. She’s wearing her black t-shirt that says “It’s All About Me”  There’s more black in the background also.

I’m excited to come around and see more Project Black. Thanks Anna for hosting this fun project.

To see the rest of my Project Black click here.

A favorite author of mine is George MacDonald and this is one of his stories that I really loved. It just happens to be Ruby bound so I’m sharing it.

And I saw these pretty little Ruby Flowers (Sweet Williams, thanks Lovella) at the Bellevue Botanical Gardens today and I’m throwing them into the Ruby post, too!

For more Ruby Tuesday Posts visit our lovely hostess Maryt at Work of the Poet.