I’m such a comfort traveler, not the really high adventure type. Even though I’m Russian, Russia would be my last choice because of the comfort issues of traveling there. Where would you want to go?

Ht: Bridget for the collage she made for me a while back…

I’ve been blogging just long enough now and I’m just relational enough that I wish I could transport myself in 10 seconds flat to:

Prince Edward Island, to take a walk with Kathie and Rinda…

Colorado, to sit on Rosemary’s wrap around porch and have pie and coffee…

Illinois, to see Kim create a bookmark from start to finish…

Pennsylvania, to take a stroll with Pam around her garden and maybe take a motorcycle ride…

Canada, to taste some of Lovella’s homemade bread right out of the oven…

Canada, to have a cup of coffee with Susanne…

Australia, to experience a season opposite my own with Missmellifluous…

England, to check out Bronte country with Sarah…

Small town USA, to Lisa’s to see her 4 boys and go to a Bible Study together…

Midwest, to watch Abigail’s hummingbird’s at her feeders…

Huntington Beach, California, to watch the season finale of American Idol with Lana…

Now wouldn’t that be cool… 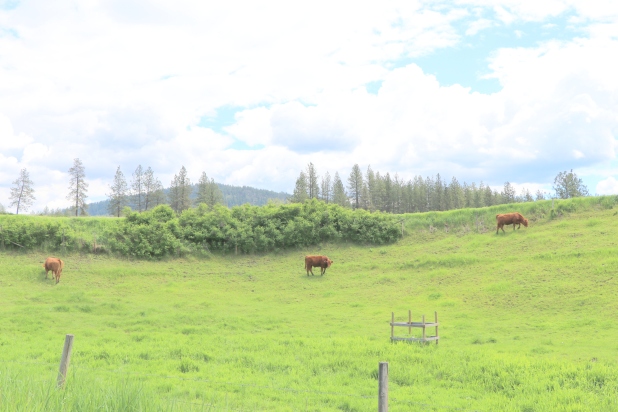 Bilbo Baggins – The Hobbit, Chapter 2
“Bother burgling and everything to do with it! I wish I was at home in my nice hole by the fire with the kettle just beginning to sing!”

Elrond
“This is the hour of the Shire-folk, when they arise from their quiet fields to shake the towers and the counsels of the Great.”

For our daughter Katie’s high school graduation in 2004, “Dear” and I took her to Great Britain. Katie is a reader, a learner, a writer, a poet and an artist. We asked her what she’d want to see and she came up with the brilliant idea of following some of her favorites around the Isle! The following is a photo log of our trip that we can highly recommend to all lovers of Hobbits, Inklings, Literary Giants, 19th Century England, Harry Potter, and wacky Holy Grail enthusiasts!

The Eagle and Child (The Bird and Baby) Oxford

We set out from our first B & B base in Cheltenham to tour Oxford. Our first stop was The Eagle and Child (The Bird and the Baby) where the Inklings would meet and discuss their current writings, thoughts, etc.

The pictures on the wall are of C. S. Lewis, Tolkien, and other Inklings, plus letters, etc. We had a bite to eat and a pint was raised to toast our respected authors! “It comes in pints?”

“Dear” and Katie on Addison’s Walk. This is on the grounds of Magdalan College (pronounced Maudlin) where Tolkien and Lewis would walk and have long conversations, after which C. S. Lewis was converted to Christianity. We found it, walked it and reflected on the beauty and wonder of it all!

Katie would not let us leave Oxford till we found Tolkien’s grave. This was no small feat! Here we are at Wolvercote Cemetery in North Oxford at the graveside where he and his wife are buried. His son is buried here, also.  Katie left a note in Elvish, (yes, she learned to write and speak Tolkien’s Elvish).

Our next excursion took us in search of Hobbits in the Cotswolds. This is the little village of Buckley. While in the Cotswolds we also visited the Hidcote Garden which we highly recommend. We were here in April so gardens were not in their prime. If you get a Heritage pass this garden is part of the deal along with some of the castles and other sights we visited. 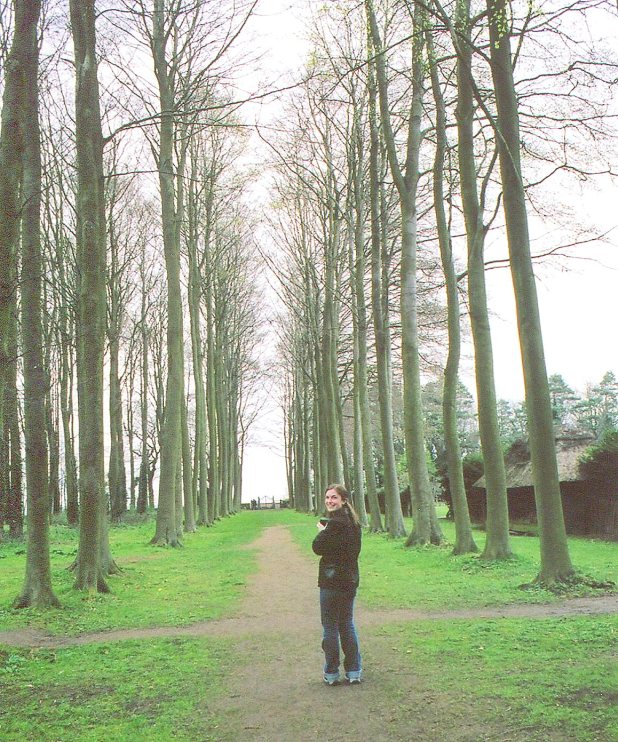 We next concentrated on Jane Austen. Our first excursion on this theme took us to Bath. We walked around the city finding the places she stayed and where some of the social gatherings happened in her books. Our prior research and guidebooks explained where these sights were. We imagined being at a dance or performance in these grand halls. We toured the Roman baths, Bath Abbey, and Number One on the Royal Crescent where Austen lived while in Bath. Two of her novels are set in Bath. On a side trip we visited Gloucester Cathedral where parts of Harry Potter movies were filmed. 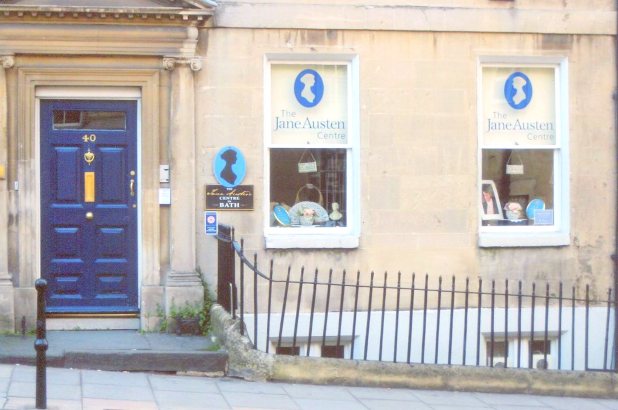 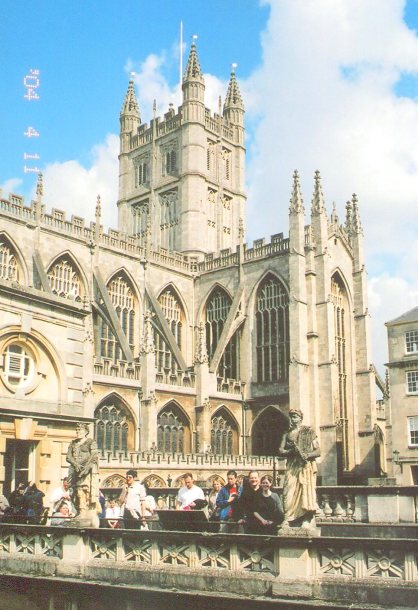 We left our first B & B in Cheltenham and headed Northeast to our second B & B in Sheffield. Although Sheffield wasn’t a comfy, cozy, little town it gave us good access to continue following Austen haunts. (I’d definitely pick some place more quaint to stay the next time we tour this area). The photo below is of Chatsworth House. The house Jane Austen based Darcy’s family home after. The new Pride and Prejudice movie actually filmed segments here. We were here in 2004 before the new film.  The estate was quite breathtaking. The small village of Bakewell close by was very reminiscent of  Lambton where Jane and her Aunt and Uncle stayed in Derbyshire.

“Every disposition of the ground was good; and Elizabeth looked on the whole scene — the river, the trees scattered on its banks, and the winding of the valley, as far as she could trace it — with delight.”

From Sheffield we continued North and a little East to the wonderful walled city of York. We dropped our rental car off here because you do not need a car in this compact city and from here we were taking a train to Edinburgh. We had the coolest walking tour book of this city and we were able to see a lot of things we would have missed without it. York Minster is a beautiful  Gothic Cathedral and we would recommend attending Evensong there.

From York we traveled by train north to Edinburgh. We arrived in Edinburgh found our self catering flat we rented and toured Edinburgh Castle and as much of Edinburgh our tired bodies could endure. We ate at a nice pub where Katie says she had the best hamburger she’s ever eaten. 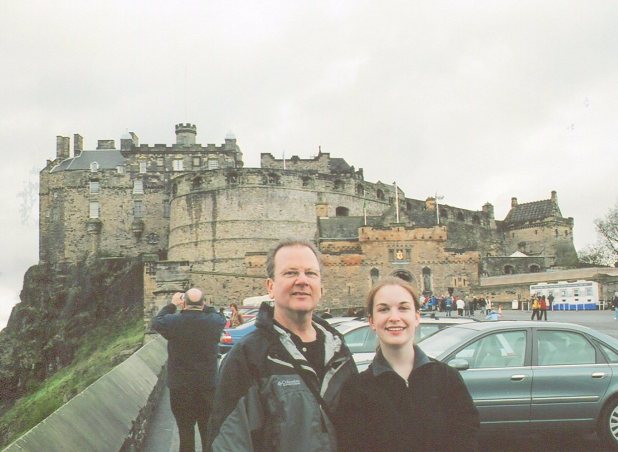 Our main side trip from Edinburgh was by bus to Stirling with a connecting bus to the little town of Doune where you’ll find Castle Doune. Castle Doune is the sight of some of the filming of Monty Python and the Holy Grail. This was a must stop for our daughter Katie. We were the only people at the castle (it was part of our Heritage Pass). To those of you who are familiar with this film you are handed coconut shells to walk around the grounds with. We were throwing out lines from the movie (Run Away, run away!) and making horse clip clop noises (with the coconut shells). They even take a picture of you here and post it on the official web page for Castle Doune and Monty Python and the Holy Grail. Hilarious fun. Back in Edinburgh we were given bad directions to the Elephant Cafe and never found it. So our Harry Potter sightings had to be confined to the outside of Bodleian Library (Oxford) and the outside of Gloucester Cathedral (Gloucester) where filming took place.

From Edinburgh we took a train straight to London. We were finishing our trip here with so much to see. We walked our feet off. We went to the National Gallery, Westminster Abbey, St. Paul’s Cathedral, The Tower of London (photo), and so much more. We were here for the Queen’s 80th birthday and got to hear and see the cannons speak 80 times! One of my favorite sites in London is the British Library and their Greatest Treasures Room. You’ll see the Gutenberg Bible, Magna Carta, many incredible Sacred Texts, Literary Manuscripts by Austen, Bronte’, Chaucer, etc. Music on loan from the Beatles.  A must see when you’re in London. We included a trip to the theater to see Les Miserables. London was a wonderful culmination to a great tour of Great Britain. 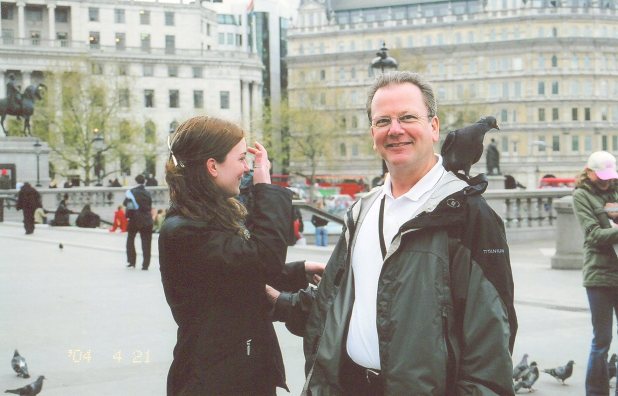 The Tower of London and Tower Bridge

Here’s the main contributor and researcher for our marvelous literary tour of Great Britain.

I’m joining the fray over at Callapidder Days  for the Spring Reading Challenge. Here’s my list of books I’d like to read/re-read.

Clouds of Witness  by Dorothy L. Sayers,  “One of the greatest mystery story writers of this century.”-L.A. Times

The Screwtape Letters  by C.S. Lewis,   “My dear Wormwood,…”

The Treasure Principle  by Randy Alcorn,  “This book is about the joy of giving”

When People are Big and God is Small by Edward T. Welch,   (Overcoming Peer Pressure, Codependency, and the Fear of Man)

Byzantium by Stephen Lawhead,  An Irish Monk, Aidan, accompanies a gift, the Book of Kells to Byzantium. (Fantasy)

Oops! I forgot I’ll need to read Harry Potter and the Half Blood Prince by J.K. Rowling so I’m ready for book #7.

Just for the record I’m finishing Practical Christianity by William Wilberforce, and Living the Cross Centered Life by C.J. Mahaney before I move on to the rest.

Update: You can find my book reviews here;