Knowing the hour for His death is fast approaching, Jesus has come here in need as never before of His Father’s comfort and strength. Instead, hell – utter separation from God – is thrust in His face.

We hear Him cry out: Father – is there an alternative? Is there any way to avoid this? If there’s a way this cup could pass from Me, would You please provide that to Me?

Silence. We can see it in His face – Jesus receives no answer to this desperate entreaty.

A second time He pleads for an alternative to that horror of abandonment by His Father. If such an alternative existed, the Father would most surely provide it. But the obedient Son’s plea to his loving Father is met with silence. Why?

Listen to this verse again for the very first time: For God so loved the world…that He is silent to His Son’s agonizing appeal.

This is what bearing our sin means to Him – utter distress of soul as He confronts total abandonment and absolute wrath from His Father on the cross, a distress and an abandonment and a rejection we cannot begin to grasp.

In this, our Savior’s darkest hour…do you recognize His love for you?

The following song by Stuart Townend is so fitting in describing what God has accomplished for us through His beautiful Son, Jesus. May God fill all of us full and fresh with these truths this Easter weekend and let us “recognize His love for us”.  Blessings on your thoughts of Him!

How Deep the Father’s Love for Us

How deep the father’s love for us,
how vast beyond all measure
That He should give His only Son,
To make a wretch His treasure

Behold a man upon the cross
My sin upon His shoulders
Ashamed, I hear my mocking voice
Call out among the scoffers

I will not boast in anything
No gifts, no powers, no wisdom
But I will boast in Jesus Christ
His death and resurrection

Why should I gain from His reward?
I cannot give an answer
But this I know with all my heart
His wounds have paid my ransom 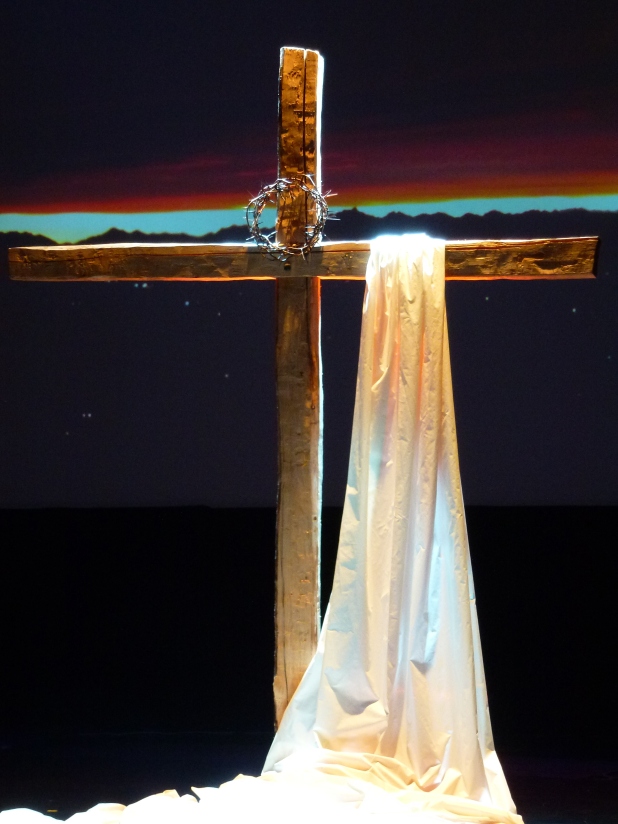 Come Ye That Seek the Lord

Come ye that seek the Lord,
Him that was crucified,
Come listen to the Gospel word,
And feel it now applied;
To every soul of man
The joyful news we show,
Jesus for every sinner slain,
Is risen again for you.

The Lord is risen indeed,
And did to us appear,
He hath been seen, our living head,
By many a Peter here:
We, who so oft denied
Our master and our God,
Have thrust our hand into His side,
And felt the streaming blood.

Raised from the dead we are
The members with their Lord,
And boldly in His name declare
The soul reviving word;
Salvation we proclaim
Which every soul may find,
Pardon and peace in Jesus’ name,
And life for all mankind.

O might they all receive
The bleeding Prince of Peace!
Sinners, the glad report believe,
Of Jesus’ witnesses;
He lives, who spilt His blood;
Believe our record true,
The arm, the power, the Son of God
Shall be revealed in you.

“Trumpets of Jesus, heralding spring” is how my mom refers to her favorite flower…

This was a comment from one of my Facebook friends on a post showing some daffodils that popped up in my yard. I’m going to embrace that description of daffodils from this old friend of my youth. She, Vera Kushnerov, and her husband Paul worked with the youth in our Russian Baptist Church. Their son Paul shared this story about his mom. Thank you Paul. 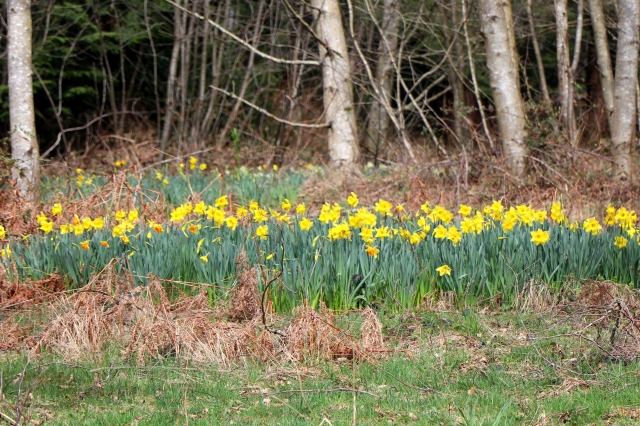 When I was in elementary school Vera asked me to write letters to her fiance Paul who was serving in the military. I embraced the idea and was so excited when a letter came to me in the mail from Paul. This experience sparked the habit of writing letters and sending cards to people in my life. I even enjoyed a pen pal for a time. In high school/college the youth pastor and his wife set up a sunshine committee to send notes and birthday cards to others in our group and gave the job to me. I’m sad to say that after the whole internet, email, facebook, instagram forms of communication have overtaken the world my habit of sending a hard copy greeting has gone by the wayside. 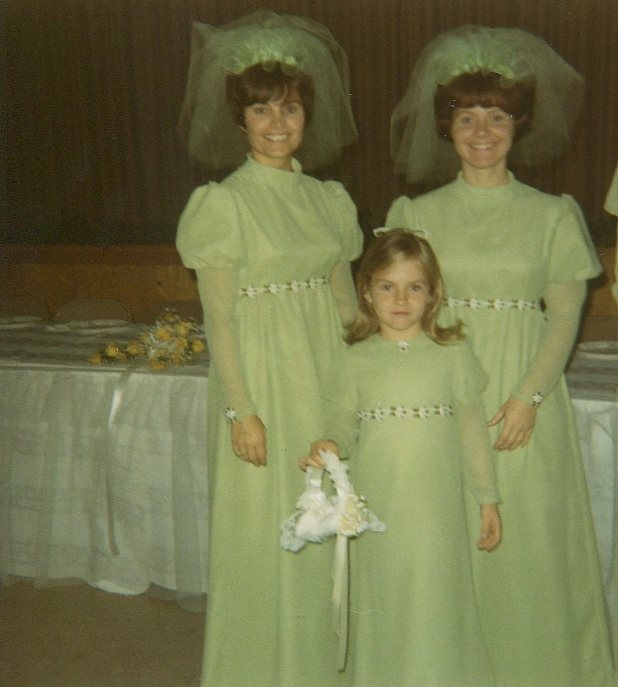 Vera is the lovely lady on the left, my dear cousin Valia is on the right and that’s my sister Lana the flower girl. This was the wedding of one of the Menn girls, Manya maybe? Vera is my Aunt Nina’s youngest sister. Vera is my cousin Valia’s aunt and Manya’s aunt, too. Are you all following me? This Russian community stayed real close starting in Iran and continuing in the Los Angeles area. 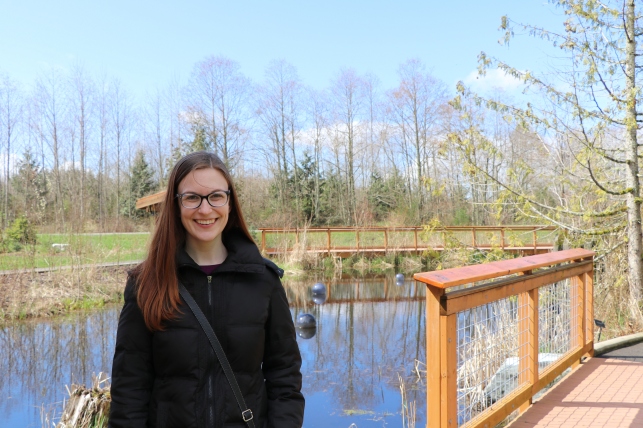 Last Tuesday Katie and I went to Bonhoeffer Gardens hoping the daffodils would be showing off their color.

Only about half of the daffodils were showing off.

The photo at the top of this post was from the daffodil fields in Mt. Vernon last March when my sisters were visiting. Flowers are a bit behind this year.

Awake and hail with heart and voice
The message of these hours!
With all the wakening earth rejoice;
Be glad with birds and flowers.
Behold the joyous Easter day
That brings the news to earth
Of Easter morning far away,
When life from death had birth.

After Katie and I walked about Bonhoeffer Botanical Gardens we headed back to Seattle and to the University of Washington to walk along the Quad to enjoy the Cherry blossoms. That post is coming soon.

Do you have plans for Easter? What is your favorite flower?

Again the Lord of Light and Life

Again the Lord of light and life
Awakes the kindling ray,
Unseals the eyelids of the morn,
And pours increasing day.

O what a night was that which wrapped
The heathen world in gloom!
O what a Sun which rose this day
Triumphant from the tomb!

This day be grateful homage paid,
And loud hosannas sung;
Let gladness dwell in every heart,
And praise on every tongue.

Ten thousand different lips shall join
To hail this welcome morn,
Which scatters blessings from its wings
To nations yet unborn.

Jesus, the friend of human kind,
With strong compassion moved,
Descended like a pitying God,
To save the souls He loved.

The powers of darkness leagued in vain
To bind His soul in death;
He shook their kingdom when He fell,
With His expiring breath.

Not long the toils of hell could keep
The Hope of Judah’s line;
Corruption never could take hold
On aught so much divine.

And now His conquering chariot wheels
Ascend the lofty skies;
While broke beneath his powerful cross,
Death’s iron scepter lies.

Exalted high at God’s right hand,
And Lord of all below;
Thro’ Him is pardoning love dispensed,
And boundless blessings flow.

And still for erring, guilty man
A brother’s pity flows;
And still His bleeding heart is touched
With memory of our woes.

To Thee, my Savior and my king,
Glad homage le me give;
And stand prepared, like Thee, to die,
With Thee that I might live.

There are so many beautiful hymns for Easter that I’m starting early and will probably go later in posting them. Thank you Jesus for all your sacrifices for us!

On Monday Dear and I drove to Chilliwack, British Columbia for dinner with the Mennonite Girls. On the way at exit #215 off Interstate 5 in Snohomish County we pulled off the highway to change drivers. We were so happy that this was the exit we took because we found some treasures to enjoy.

We saw this church in the distance and then noticed the sign below. 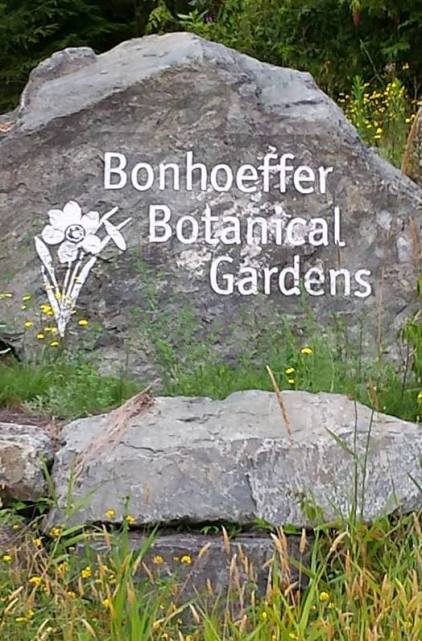 Dietrich Bonhoeffer, one of the most well-known Protestant theologians of the twentieth century, an active anti-fascist, a man who had an extraordinary personal courage, who was executed in a German concentration camp a few weeks before the German surrender. He is a symbol of Lutheran martyrdom in the twentieth century. His statue, placed on the western facade of Westminster Abbey in London among the ten Christian martyrs of that time. Several parish churches are named in his honour. Also a postage stamp released in his memory in Germany.
The Bonhoeffer’s theological views had a great influence on the further development of the Christian theology.

A couple years ago I read a biography of Bonhoeffer by Eric Metaxas that was a very good book and I highly recommend it. It’s available on Amazon…

As Adolf Hitler and the Nazis seduced a nation, bullied a continent, and attempted to exterminate the Jews of Europe, a small number of dissidents and saboteurs worked to dismantle the Third Reich from the inside. One of these was Dietrich Bonhoeffer—a pastor and author. In this New York Times best-selling biography, Eric Metaxas takes both strands of Bonhoeffer’s life—the theologian and the spy—and draws them together to tell a searing story of incredible moral courage in the face of monstrous evil.

We made it to a small parking lot to change drivers and while I was out of the car I took these photos.

These plantings on top of these kiosks are to attract butterflies.

There were several senior citizens with easels set up busy painting.

We drove around to the front of the church to see the name, Freeborn Lutheran Church & Cemetery. 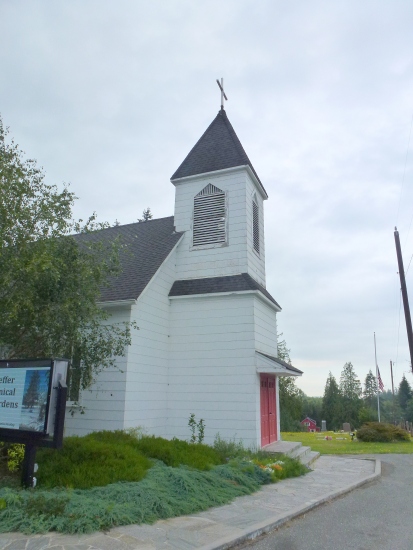 I plan to go back next March to see the 400,000 daffodils in bloom around the church.

Pilchuk living history farm is part of the property here, too. We didn’t have time to explore since we were only changing drivers and continuing to our destination.

I’m linking up to InSPIREd Sunday with Beth and Sally.

We are having a very lazy day at this old house. We had a short shopping excursion and that’s about it. It took a while but the sun is out from behind the clouds. They are predicting some hot temps here during the next week. How are things in your neck of the woods.