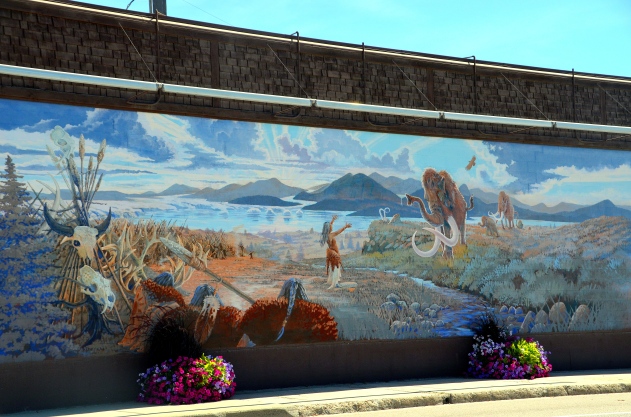 It was hard to get the whole of this mural in one photo. This mural is on the side of a building along highway 395 in downtown Chewelah, Washington. Chewelah is a one traffic signal town in the northeastern corner of the state of Washington.

Dear and I are spending several days between Chewelah and Colville with our son and daughter in law. It’s a nice change to be out in the country, in small towns.

The early settlers named the town Chewelah (spelled various ways). According to some sources, this was an Interior Salish Indian word for small, striped snake, which refers either to snakes in the area or to the narrow, serpentine appearance of the river. Alice Sherwood Abrahamson, a member of one of the Indian families still living in the Chewelah area around 1900, offered this explanation in a memoir: “The name Chewelah comes from the Indian word ‘S che wee leh,’ meaning water or garter snake. There was a spring in what is now the southwest end of Chewelah. The old McCreas lived there and their homestead was called ‘S che wee leh ee,’ for the spring that bubbled up there. The motion of the water gave the illusion of snakes moving about in the water”

Another mural on the side of a building that I spotted along highway 395.  On this portion of the highway the speed limit is 25 miles per hour so it’s a little easier to spot gems to photograph.

I’m linking up to Monday Mural with Oakland Daily Photo.

This Sunday was a full day for all of us. Dear and our son continued work on the pump house and our daughter in law and I traveled down to Spokane for the Bubble Run on the Spokane Riverfront. In the late afternoon we joined in for a birthday barbecue for our daughter in law’s aunt in Colville. 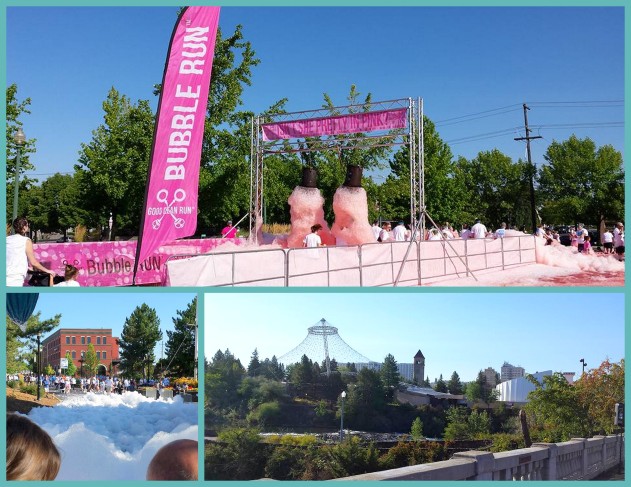 I’m also linking up to Mosaic Monday with Maggie at Normandy Life.

We have one more full day in the country before we head back home to the city. Hope you all have a great start to your week.