…when website photos lie. I already moaned about our hotel in Henley-on-Thames here, but I’ll be moaning a little more with chuckles thrown in and tell you more about our experience which sadly we had to pay dear money for.

As I mentioned before the location of the hotel was right across the street from The River Thames.

When we checked in we took our suitcases to the room with no help offered.  The room looked nothing, absolutely nothing like any of the rooms shown on the Website.  The website showed photos of a nicely appointed hotel with nice rooms. Our room charge was 150 pounds so we were surprised when this was the condition of the chairs in our room. We left for a walk into town for lunch. When we came back to the hotel to freshen up before doing some more walking, the water in the room was not working. When we went down to the front desk there was a sign stating the water would be off until 6:00 P.M. Just a sign no one attending the desk. We didn’t understand why they didn’t inform us of that little fact when we checked in.  After dinner and an evening walk we returned to the hotel and we went into the hotel bar to order a drink. The very young bartender said he was sorry but they did not have any gin. No Gin in a British bar? I just chuckled. We headed to our room and managed to get some sleep with our window open for air and the large portable fan on.

The early morning views were beautiful and still could be appreciated over the noise of the early delivery trucks on the road below our window. We got ready for breakfast and we headed down to the lobby to try to find where breakfast would be served. No one was in sight. No one at the front desk. When we checked in the person behind the desk had pointed in the general direction of where breakfast would be served. We walked that way and spotted a room with tables set for service and took a seat.

Our first thought was well this is nice maybe breakfast will make up for our less than comfortable night until… we waited and waited and waited and then Dear went out to try to find someone who would serve us some breakfast. There still was no one at the front desk. He finally found someone and we had to leave this nicely appointed room and head further down the hall to another room without flowers on the table.

The breakfast staff consisted of two young guys who didn’t seem sure of what they were doing. It honestly felt like they were pulled off the street that morning and shown quickly what to do.  Notice our empty coffee cups. It took a long time to get coffee and a longer time to get our breakfast. We checked out, shook the dust off our shoes and headed to our next location for our last two nights that proved to be the balm we needed after this disappointing stay at the Red Lion Henley. We were so glad we had only booked one night here.

We do not recommend The Red Lion in Henley. We would love to re-visit Henley-on-Thames but we will do some better investigating on where to stay…

After my rant about the hotel we stayed in last night I wanted you all to see our new home away from home for the next two nights. Do not feel sorry for us. We are truly content and blessed as we wind down our trip to Jolly Old England.

No roads outside our hotel window and a nice green lawn down to the river Thames. A wonderful way to end our time here and to forget about the last hotel we stayed in.

Here’s Dear having a little shut eye in the shade at the rivers edge before we check into our room. We also enjoyed the peaceful time watching the boaters and rowers glide by.

as opposed to these poor worn chairs at the last hotel. 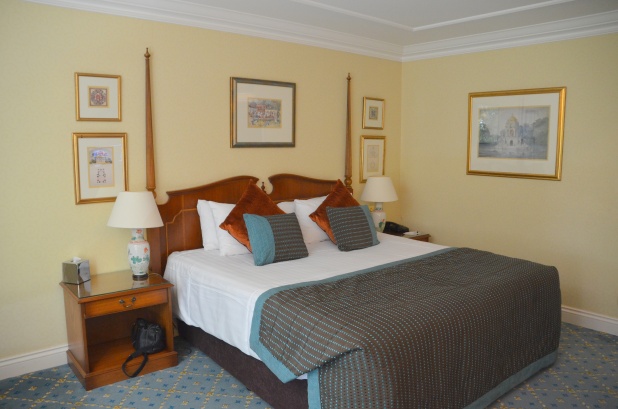 A nice king sized bed instead of our smaller sad bed last night. The only thing we hear outside with our windows open here are birds, an occasional boat horn, and distant planes leaving from Heathrow. We are steps away from the river Thames and a few hundred yards from the main road.

Today before we checked in here we spent a few hours in Windsor including a tour of Windsor Castle. While in Windsor we happened to meet a family from Argentina and talked with them about the disappointing loss to Germany at the World Cup. We ate lunch close to the riverside and then headed back to our hotel to check in. One more full day before we head to Heathrow early on Thursday to deal with all the new security checks.

Have a wonderful Tuesday! 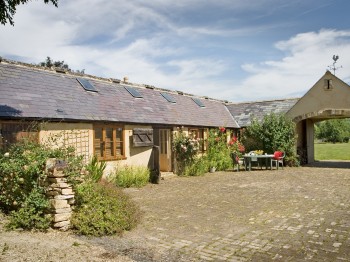 After very little discussion Dear and I decided that the best place to go to celebrate 40 years of marriage would have to be England. The discussion was easy, hitting the purchase button for the flights was a little more difficult but after we did it was full speed ahead to book places to stay. The first spot we chose is a self-catering cottage in a very small village in the Cotswolds. The photo above is the exterior of Fox Cottage. We will spend a leisurely 7 nights here and explore several towns and villages in the area. We’ll venture off as far as Oxford from this spot. “Self-Catering accommodation simply refers to an efficiency in which guests take care of their own meals, laundry and other needs. The accommodation provided has facilities that allows guest to cater for their own day to day needs. Self-Catering accommodation includes a suite with a fully equipped kitchen mainly for guest to prepare their own meals.”

The second spot we are going to stay for 3 nights in in Ross on Wye in Herefordshire. We chose this spot because we really want to visit Hay on Wye which is well known for Used Book Stores. Here’s what wiki says about this town “Hay-on-Wye, is a small market town and community in Powys, Wales, situated on the English border. Often described as “the town of books”, it is the National Book Town of Wales.” 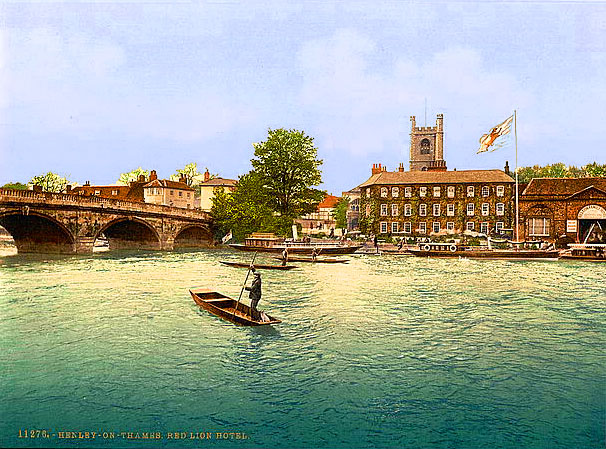 On our way back to a closer proximity to London Heathrow we will re-visit the town of Henley on Thames. Dear and I stayed here in 1973 or 1974 with our Christian Rock Band. We will be staying for one night at the Red Lion that you see here on this old postcard. We hope to visit some of the villages around this area where Midsomer Murders was filmed. We will definitely visit the Argyle in town for a meal.

Our grand finale for two nights will be the Oakley Court in Windsor. Isn’t it grand? We will spend some time in the town of Windsor and if the Queen is not in residence at Windsor Castle we hope to have a tour. From Windsor we’ll make the short drive to London Heathrow and fly home.

Our actual anniversary isn’t until December but we are choosing to celebrate in England in July.  The first 2 times Dear and I traveled to England together was in July of 1973 and July 0f 1974. During our trip in 1974 we were already engaged to be married with our wedding planned for December of that year. If anyone has any suggestions for places to visit in the areas of the Cotswolds, Oxford, and Southern Wales please let me know.

Hope you had a nice weekend. I know our Canadian Hockey Fans across the line enjoyed their Sunday. Congrats to Canada on winning the gold.