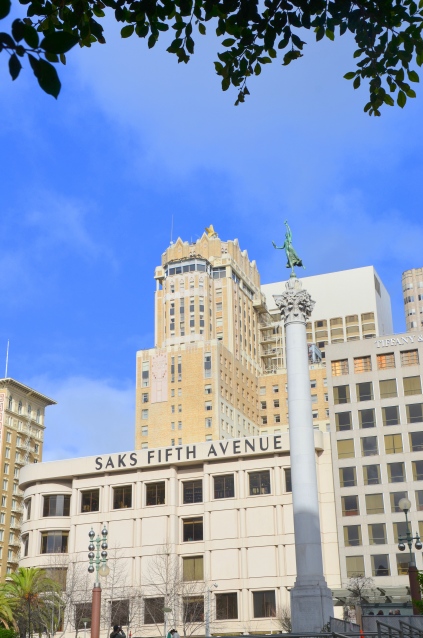 Most everyone that visits San Francisco sees this piece of public art.  Two years before the Gold Rush, in 1847, Jasper O’Farrell, the first surveyor of San Francisco,  created a design for the city, with Union Square as a public plaza. By the 1880s, it was a fashionable residential district, and in 1903, this towering monument was added. A monument to Admiral George Dewey’s victory at the Battle of Manila Bay during the Spanish American War. It also commemorates U.S. President William McKinley, who had been recently assassinated. The figurine at the top of the monument, “Winged Victory”, was modeled, reportedly, from the likeness of a local heiress, Alma de Bretteville Spreckels. 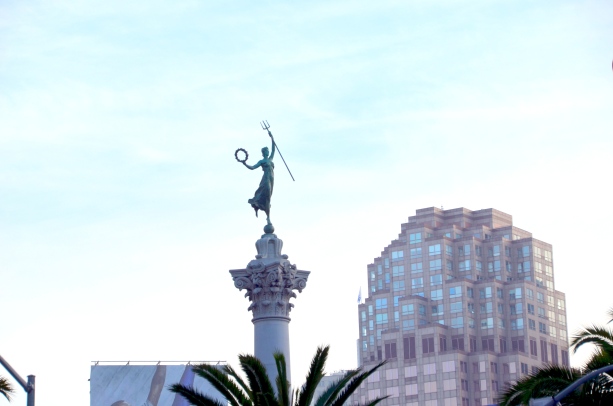 Designed by sculptor Robert I. Aitken and architect Newton J. Tharp, the Dewey Monument consisted of a 79-foot-tall granite shaft, surmounted by an 18-foot-high pedestal adorned with the bronzed figure “Winged Victory.” In one hand she bears a trident, the symbol of Poseidon and of naval victory, and in the other hand, a laurel wreath, also a symbol of victory. 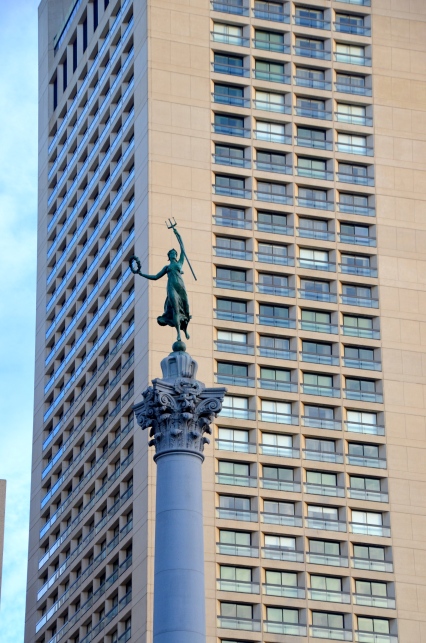 …to ABC Wednesday started by Mrs. Nesbitt and carried on by Roger and ABC team for D is for Dewey!

So today I’m headed for a meeting to talk and decide about all my Medicare choices. Ugh. It’s kind of shocking that I’ve gotten to this stage of life. You’d think after all these years and all my experience I’d be able to wade through it all on my own. Then again why not let someone who works in the field benefit from my indecision and steer me in the right direction?  It’s not a life and death decision but I do pray I make a good choice! Hope you have a wonderful Tuesday! 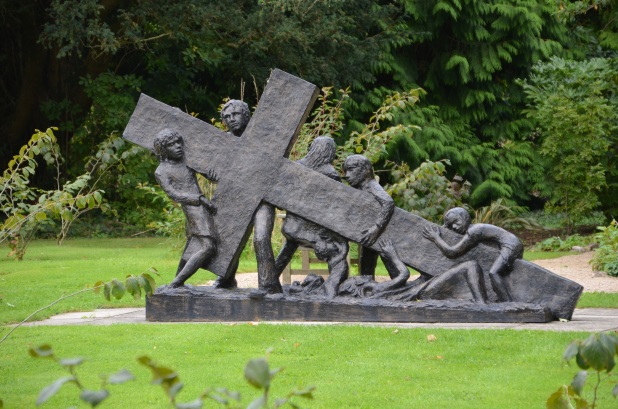 Hail! My Ever Blessed Jesus

Hail! my ever blessèd Jesus,
Only Thee I wish to sing;
To my soul Thy Name is precious,
Thou my Prophet, Priest and King.

O what mercy flows from Heaven!
O what joy and happiness!
Love I much? I’m much forgiven
I’m a miracle of grace.

Once with Adam’s race in ruin,
Unconcerned in sin I lay;
Swift destruction still pursuing,
Till my Savior passed that way.

Witness, all ye hosts of Heaven,
My Redeemer’s tenderness;
Love I much? I’m much forgiven,
I’m a miracle of grace.

That blest moment I received Him,
Filled my soul with joy and peace;
Love I much? I’m much forgiven,
I’m a miracle of grace.

Savior, Teach Me Day by Day

Savior, teach me day by day
Love’s sweet lesson to obey,
Sweeter lesson cannot be,
Loving Him who first loved me.

With a child’s glad heart of love
At Thy bidding may I move,
Prompt to serve and follow Thee,
Loving Him who first loved me.

Teach me thus Thy steps to trace,
Strong to follow in Thy grace,
Learning how to love from Thee,
Loving Him who first loved me.

Love in loving finds employ,
In obedience all her joy;
Ever new that joy will be,
Loving Him who first loved me.

Thus may I rejoice to show
That I feel the love I owe;
Singing, till Thy face I see,
Of His love who first loved me.

For Mosaic Monday please visit Mary at The Little Red House. Her photography is always stunning. I took these photos of the beautiful Dogwood and Wisteria during a 5K walk I participated in on Saturday morning. I always have time to stop and smell the roses!! I just had to jog to catch up with my walking buddies. I am determined to plant a Dogwood, Wisteria and lilac in my yard!!

For Blue Monday you need to visit Sally at Smiling Sally. She’s a very gracious hostess! These sculptures were on the courthouse where I was on Jury Duty last week. I never had to sit on a jury but at least I got some photo time in!  These are a great assortment of Northwest wildlife!

Have a great Monday and start to your new week!

Photobucket replaced all my photos with ugly black and grey boxes and they are holding my photos hostage until I pay them lots of money. I’m slowly going through all my posts and trying to clean them up and replacing some photos. Such a bother.

For Photo Hunters this week the theme is string(s). I chose to share these photos of this sculpture suspended from the ceiling at the Seattle/Tacoma Airport. It is suspended with wire string. There’s a description of this piece below.

Also worth noting is the suspended sculpture “Landing,” by Ralph Hemlick and Stuart Schechter. Consisting of over 2,800 pewter pieces suspended from 1,050 wires, it depicts a goose landing on water, with a three-dimensional reflection underneath. The landing goose is formed by many small birds, with its reflection created by fish. As an added bonus for those who take the time to look, mixed in throughout the piece are more than fifty different Northwest themed pieces, including umbrellas, the Pike Place Pig, and SAM’s Hammering Man.

For more Photo Hunters photos of String click over to tnchick.

Photobucket is holding all my photos that I posted on my blog from 2007-2015 hostage and replaced them with big black and grey boxes with threats. So discouraging…as I’m slowly trying to clean up thousands of posts!

“Therefore if anyone is in Christ, he is a new creation; the old has gone, the new has come! All this is from God, who reconciled us to himself through Christ and gave us the ministry of reconciliation: that God was reconciling the world to himself in Christ, not counting men’s sins against them. And he has committed to us the message of reconciliaton.”

2 Corinthians 13:11(ESV) ~ “Finally, brothers, rejoice, Aim for restoration, comfort one another, agree with one another, live in peace; and the God of love and peace will be with you.”

You can click here to read about the inspiration for this sculpture.

Photobucket is holding all my photos from 2007-2015 hostage and they have blacked them all out. I’m slowly working at restoring my posts without their help. Such a tiresome bother!

Galatians 6:14 ~ “May I never boast except in the cross of our Lord Jesus Christ, through which the world has been crucified to me, and I to the world.”

For more Word Filled Wednesday click over to The 160 Acre Woods.

My sister Lana from Above the Clouds took my photo and used a couple of the programs she has and really beautified this further. I’m going to have to sit down with her and take some lessons…

Photobucket is holding all my photos from 2007-2015 hostage and they have blacked them all out. I’m slowly working at restoring my posts without their help. Such a tiresome bother!