We were in Cody, Wyoming the last weekend of June. We stopped at the visitor center first to get our bearings. They were very helpful. Dear bought some boots at Wayne’s Boot Shop. When in the Wild West boots are a great souvenir for kicking around in. If you had any doubts that you were in the wild west there were many signs to confirm it. 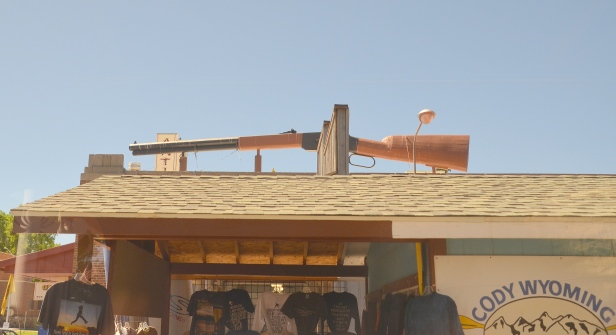 Buffalo Bill helped found Cody, Wyoming, in 1895. In 1902, he built an establishment which he called “just the sweetest hotel that ever was” and named it for his youngest daughter, Irma. It was built to appeal to visitors from around the world — as a staging point for sightseers headed for Yellowstone, big game hunters, summers tourists, and businessmen investigating the ranching, mining, and other business opportunities. Buffalo Bill maintained two suites and an office at the hotel for his personal use.

We enjoyed breakfast at the Irma right next to this stone fireplace that Buffalo Bill had built in the hotel.

The fireplace is an assemblage of rock, ores, minerals, and fossils from the Big Horn Basin.

By the turn of the twentieth century, William F. Cody was arguably the most famous American in the world. No one symbolized the West for Americans and Europeans better than Buffalo Bill. Every American president from Ulysses S. Grant to Woodrow Wilson consulted him on matters affecting the American West. He counted among his friends such artists and writers as Frederic Remington and Mark Twain. He was honored by royalty, praised by military leaders, and feted by business tycoons. Cody was America’s ideal man: a courtly, chivalrous, self-made fellow who could shoot a gun and charm a crowd. Yet as Annie Oakley put it, “He was the simplest of men, as comfortable with cowboys as with kings.”

For the first time since her husband’s death a quarter of a century before, Queen Victoria appeared in person at a public performance.

Her attendance at the Wild West show was news everywhere in the English-speaking world, and the fact that she made her appearance in the context of the celebrations that marked the Jubilee Year of her reign only added more weight to the occasion. And what an occasion it was. When the show began and a rider entered the arena carrying the American flag, Queen Victoria stood and bowed. The rest of the audience followed suit, while British soldiers and officers saluted. As Cody described the moment

All present were constrained to feel that here was an outward and visible sign of the extinction of that mutual prejudice, amounting sometimes almost to race hatred, that had severed two nations from the times of Washington and George the Third to the present day. We felt that the hatchet was buried at last and the Wild West had been at the funeral.

I’m also linking up to Monday Mural and signs, signs.

We’ve had a nice quiet weekend after all the excitement last weekend with our kids here and Reyna the dog. More excitement during the week with our book launch and dedication in Abbotsford, B.C. It was good to enjoy some Olympics and Netflix binging on Foyle’s War. We had not watched any of this series yet and are enjoying it from the beginning. Hope your weekend was a good one.