The Copa America Centenario USA 2016 is an International Soccer Tournament that is the oldest international continental football competition. 32 matches played throughout the USA June 3-26th with 16 teams from the Americas in 10 cities. Seattle is one of the 10 cities. This is the first time that the tournament is being hosted outside of South America.

Our son Josh, daughter in love Laura and ellen b. purchased tickets for the U.S.A. v. Ecuador quarterfinal game hosted by Seattle. I pulled out my USA gear to take to the game.

Here we are before the game started. Sunshine in Seattle!

Our own Clint Dempsey from the Seattle Sounders scored the first goal and was the Man of the Match.

All smiles at the end of the game after our 2-1 victory! On to the semi-finals where we will play Argentina or Venezuela depending on who comes out victorious when these two teams play each other on Saturday. If I had to guess I’d say we will be playing Argentina with the amazing Lionel Messi but there are always upsets in tournaments. 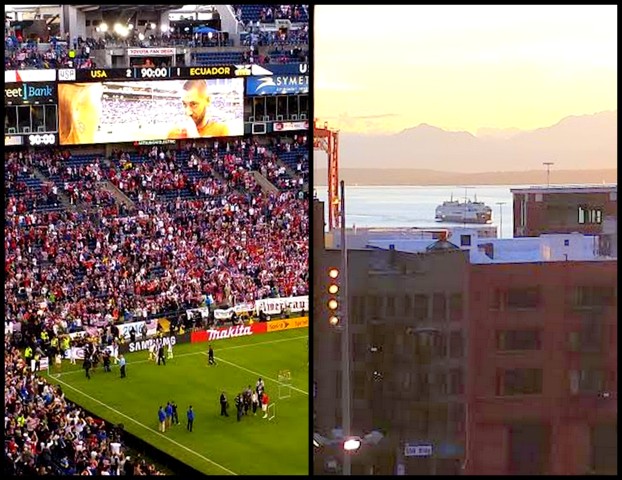 It was a beautiful night in Seattle and on the way back to our car we spotted a ferry rolling in on the Puget Sound. I only had my phone camera with me and it doesn’t capture how beautiful the night was.  It was a historical night and a fun night for the 3 of us.

I’ve said this before and I realize many of you are not sport fans and especially not soccer fans but soccer is my favorite sport and thank you for indulging me as I share this part of my life occasionally.

Here in the USA and in Canada we celebrate Father’s Day this Sunday. Our Western Washington kids are treating their dad with a brunch in Seattle on Sunday. I’ll be calling my dear old Pop who lives in California to wish him a happy father’s day. Do you have plans?

I’m happy to say I made it to my first International soccer game in a country other than my own! I’ll have lots to share about this day later with more photos.

Happy St. Patrick’s Day everyone. I quite by mistake ordered this drink and when it came to the table in it’s green glory it reminded me what day it was. The Italians don’t give much thought to St. Patrick’s day.

Dear Lord,
Give me a few friends
who will love me for what I am,
and keep ever burning
before my vagrant steps
the kindly light of hope…
And though I come not within sight
of the castle of my dreams,
teach me to be thankful for life,
and for time’s olden memories
that are good and sweet.
And may the evening’s twilight
find me gentle still.

God bless you all my dear friends!