This is our Pop’s story dictated verbally by him a few years ago. I’ll be sharing excerpts every Tuesday. When I add to his story or explain a photo I will Italicize my words. Our Pop’s words will not be italicized. Our mom does not come into Pop’s story until “Tuesdays With Moisi ~ 9” even though I’ve posted photos of her before #9. I have very few photos from our parents’ life in Russia and Persia. At the end of my Tuesday posts I’ll add links to all the other posts. 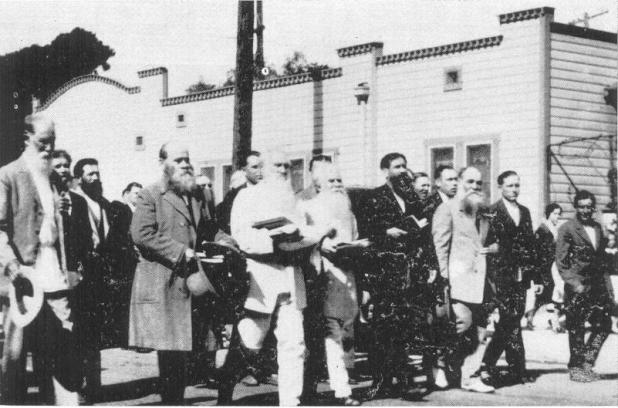 The photo above of this group of Molokan leaders was taken in Los Angeles in 1933 before my parents immigrated to the U.S. It is not my photo. I believe they were walking to the church in the photo below to dedicate it’s formation from three separate churches.

After church on the first Sunday that he was in our village, Nadia’s cousin came up to me with a note.  It read “I want to meet you and talk with you.” I knew immediately who it was from. And so I trudged up the road to where he was staying – my knees barely supporting me.  We greeted each other. Almost immediately he said, “Let’s take a walk. I want to discuss a few things.” Then he launched into what he wanted to talk about. “I’ve heard that you are not really a good candidate for marriage.  In addition, I’ve also heard that you are not able to have children. And children are definitely a blessing.” These words made me so uncomfortable that I wanted to jump into a hole in the ground and pull the hole in after me. I answered, “I don’t know what the future holds.  All I know is that I love Nadia and I want to marry her.” I think it was then that he understood that I was determined to see this through. What about the wedding details was his next question. (Molokans do these things differently than Baptists.) I answered, “That is an issue we’ll discuss with my parents.  But one way or another we love each other and we definitely want to get married.” With that, our conversation ended. I went home and ate lunch. After lunch Nadia and I met in the fields. When I saw her smiling face my heart jumped with joy because her smile signaled her father’s acquiescence. Both sets of parents then met each other and discussed the details of the upcoming marriage, namely who was to do what and how it was to be paid for.

The first order of business was the engagement ceremony. This was to be done according to Molokan custom.  It was hosted by my parents at their home a few days later in the evening. The ceremony was basically a prayer gathering of invited guests, asking God to bless the upcoming marriage and then ending with a reception.  And so the guests came, sang, and offered messages of encouragement based on Biblical teaching. After that all took place Nadia and I made our way to the center of the room where hands were laid on us and we were to be prayed for.  To begin the actual prayer ceremony, Nadia and I asked that all in attendance would pray for us – specifically that God would bless our marriage. We then knelt and the Molokan pastor prayed for us. He was a gifted orator and his prayer was a shining example of that.  To such a degree that one of the Molokan prophets jumped in response to the inspiration of the prayer. But this jumping was specifically not to be allowed according to the agreement reached by Nadia’s father and my parents. Jumping was anathema to Nadia’s father – a staunch Baptist.  As soon as he heard the thump of the jump, he reacted immediately. “Up, Nadia! They’ve lied to us. Let’s go!” Nadia was ready to do so but she was firmly held down by my mother until the prayer was over. When it did end, Nadia, her father, mother and all their invited guests left for her aunt’s home.  As he was leaving, Nadia’s father kept repeating that he was deceived – the decibel level of his voice certainly not being on the low end of the spectrum. Only the guests of my parents remained. I walked outside and was so distraught that I seriously contemplated leaving this whole disastrous scene by taking the first means of transportation out and never coming back.  As I was standing there thinking about it, I happened to notice the position of the moon. It was just on the horizon. I had never seen it so close before. And then I felt a hand on my shoulder and a quiet voice in my ear, “Moisi, whatever you are thinking – don’t do it. Go to Nadia’s aunt’s house and be with Nadia. Her dad will calm down eventually. Everything will be OK.”  It was the voice of John Federov. I took his advice and went to the house, walked in and was greeted by a high level of commotion. The decibel level of Nadia’s father’s voice had increased significantly but his message remained the same – “They lied to us. They didn’t keep their word.” The others in the room were trying to calm him. I saw Nadia sitting on a trunk crying. Nadia’s mother went over to her and scolded her, “You got us into this and you’re the one crying about it?  Shame on you!” That made Nadia cry even more. I went over and sat next to her and began crying myself. After a while Nadia’s father did calm down. They talked him into going back to the festivities which were just beginning when we got there and it all ended without further incident. 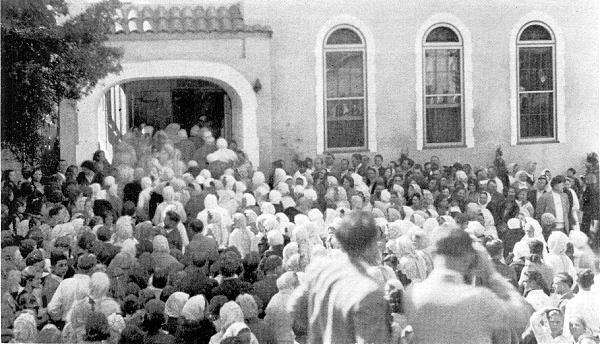 In 1933 the First United Christian Molokan Church was dedicated in their new building on 3rd street in Los Angeles. I believe 3 congregations combined to form this church that was called “Big Church”.

In l941 the First United Christian Molokan Church relocated to Lorena St. in East Los Angeles. The new church looked a lot like the photo above. This was the location that our family attended and that we became familiar with. Now the new location for this church is in La Habra. Our grandfather was a preacher/elder at this church after he immigrated to the U.S. There are several Molokan churches in California and some in Oregon, Arizona. Each church has it’s own signature. Many traditions are the same and some are becoming more different from each other because there are no governing bodies or conferences amongst them. Each location is autonomous and as older members die off things change. I’m guessing Big church got that nickname because it was one of the bigger congregations. Some Molokan churches follow a prophet named Maxim and they are “Jumpers”. Certain members in the church when becoming “spirit filled” jump in response. Other Molokan churches don’t jump. As  a young child in the church I was always shocked and mesmerized by these jumping episodes, usually occurring at a crescendo or certain stanza of a Psalm being sung. I’ll share more about Molokans and Russian Baptists in later posts and about the small group of Molokans who broke off from Big Church to form Kern Avenue Church.