We just returned from a few days in San Francisco. Dear was attending an oncology conference and I tagged along to enjoy some sight seeing. It worked out for me to also spend some time with a couple friends from my college days. My Chinese/Russian friend Alice gave me a tour of Chinatown on Thursday as part of a larger tour of the city she knows well. Then on Saturday morning we had a couple hours before we left the city and Dear and I walked to Chinatown.

The most photographed structure in Chinatown is undoubtedly the large Chinatown Gateway, also known as the Dragon Gate.

The gate was designed in 1970 by Clayton Lee and is based on the ceremonial gates that can be found in Chinese villages. The gate is adorned with sculptures of fish and dragons and is flanked by two large lion statues. The gate has three passageways. The large, central one is meant for dignitaries while the two smaller passageways are meant for the common people.

San Francisco’s Chinatown is not only the oldest but also the most famous and largest Chinatown in the U.S. Thanks to the many ornamented houses, shops and eateries the area is one of the city’s most popular tourist attractions. The lampposts are all very ornamental and have dragon motifs.

While in Chinatown with my friend Alice we enjoyed Dim Sum at one of the restaurants. 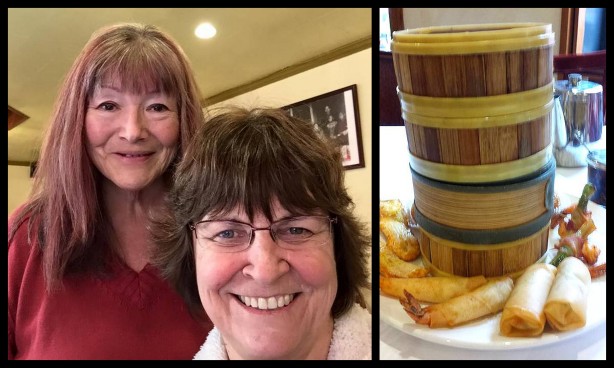 I’m linking up to ABC Wednesday created by Mrs. Nesbitt and carried on by Roger and the ABC Team.

C is for Chinatown!