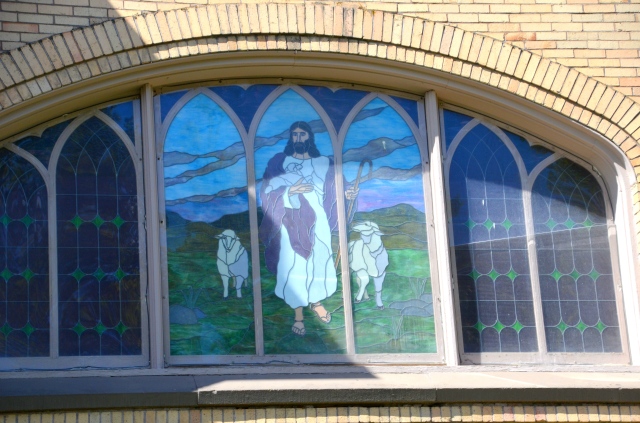 He leadeth me, O blessèd thought!
O words with heav’nly comfort fraught!
Whate’er I do, where’er I be
Still ’tis God’s hand that leadeth me.

Lord, I would place my hand in Thine,
Nor ever murmur nor repine;
Content, whatever lot I see,
Since ’tis my God that leadeth me.

And when my task on earth is done,
When by Thy grace the vict’ry’s won,
E’en death’s cold wave I will not flee,
Since God through Jordan leadeth me.

As a young man who recently had been graduated from Brown University and Newton Theological Institution, I was supplying for a couple of Sundays the pulpit of the First Baptist Church in Philadelphia. At the mid-week service, on the 26th of March, 1862, I set out to give the people an exposition of the Twenty-third Psalm, which I had given before on three or four occasions, but this time I did not get further than the words He Leadeth Me. Those words took hold of me as they had never done before, and I saw them in a significance and wondrous beauty of which I had never dreamed.

It was the darkest hour of the Civil War. I did not refer to that fact—that is, I don’t think I did—but it may subconsciously have led me to realize that God’s leadership is the one significant fact in human experience, that it makes no difference how we are led, or whither we are led, so long as we are sure God is leading us.

At the close of the meeting a few of us in the parlor of my host, good Deacon Wattson, kept on talking about the thought which I had emphasized; and then and there, on a blank page of the brief from which I had intended to speak, I penciled the hymn, talking and writing at the same time, then handed it to my wife and thought no more about it. She sent it to The Watchman and Reflector, a paper published in Boston, where it was first printed. I did not know until 1865 that my hymn had been set to music by William B. Bradbury. I went to Rochester to preach as a candidate before the Second Baptist Church. Going into their chapel on arrival in the city, I picked up a hymnal to see what they were singing, and opened it at my own hymn, He Leadeth Me.